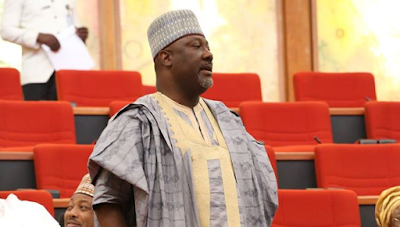 Lagos State House of Assembly members, Hon. Segun Olulade has described the Senator  Dino Melaye, as a big shame to the legislature.

The lawmaker who noted that Melaye only displayed how hollow he is by threatening to beat another man’s wife, added that the Kogi Senator has verbal diarrhoea and has displayed his unworthiness to be part of the distinguished Senators to sit in the hallowed chamber.


Olulade, who is the Chairman, House Committee on Health Services, pointed out that “no responsible and sane man will threaten to beat a woman, another man’s wife for that matter. Melaye’s action has shown that most of the things said about him are nothing but the truth.

“Dino has exposed himself as a simpleton and a court jester whose words and tactlessness cannot be taken seriously by matured people. If at all he has anything to offer, he should concentrate on making good laws for the people of Nigeria rather than looking for cheap and undeserved publicity by threatening to beat a fellow Senator.

Olulade, however, cautioned the Senator to start behaving with decorum, noting that as a legislator, “he should be an advocate of maintenance of law and order, how will he take if someone threatens to beat his wife,” he queried.

He has also displaying to the whole world his unworthiness to sit in the hallowed chambers of the Nigerian Senate,” the statement read in part.