The embattled Senate President, Bukola Saraki, yesterday held a private meeting with the Attorney General of the Federation, Abubakar Malami, and pleaded with the AGF to drop forgery charges against him and his deputy, Senator Ike Ekweremadu. 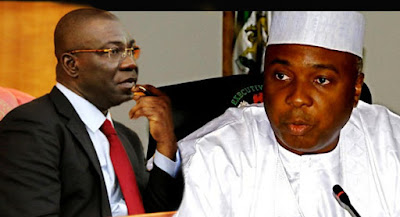 The meeting took place yesterday at the premises of the Senate when Mr. Malami, accompanied by Ita Enang, President Muhammadu Buhari’s special assistant on the National Assembly, arrived to see Senator David Umaru, head of the Senate committee on the judiciary. Mr. Malami had gone to assure Senator Umaru of his willingness to honor an invitation by the senatorial committee.


The embattled senator, who is facing two trials, one for alleged falsification in his asset declarations, the other for alleged forgery of Senate rules, turned the short meeting into a begging session. One source who was briefed on what transpired told our correspondent that Mr. Saraki pleaded with the attorney general not be part of those persecuting him, swearing that he knew nothing about the alleged forgery of Senate rules under which he was elected as Senate President.

However, just before the meeting started, Senator Saraki and Mr. Malami agreed that it should be private.

The invitation of Malami to appear is solely intended to bully him so as to force him to withdraw charges against Dr. Saraki and Senator Ekweremadu,” .SaharaReporters said.

One committee member argued that the summons itself violates the constitution and Senate rules which forbid senatorial intervention in matters that are before the courts. He cited Section 174 of the 1999 Nigerian constitution, which empowers the AGF to initiate legal proceedings against anybody according to the discretion vested in his office. The senator also remarked that Section 150 of the constitution shows that the office of the Attorney General of the Federation is one of the few offices created by the constitution.

Mr. Malami spoke sympathetically, but declined to make a commitment to stop the prosecution of Senators Saraki and Ekweremadu.Mr. Malami was likely to face hostile questioning when he is answers the summons of the Senate Judiciary committee. Mr. Malami is expected to appear before the committee tomorrow at 11 a.m. (Nigerian time).