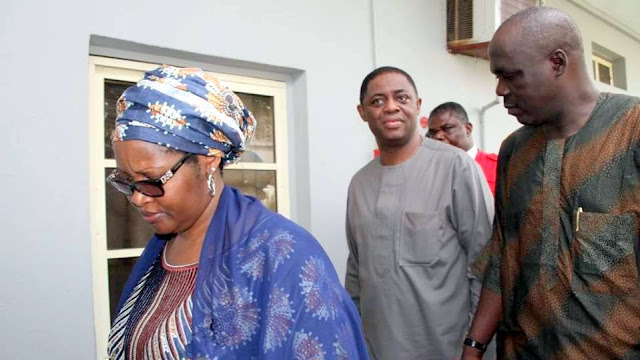 Federal High Court in Lagos has granted a N250 million bail to former Aviation Minister, Femi Fani-Kayode, who is facing corruption trial before Justice Muslim Hassan.
The former spokesman for the Goodluck Jonathan 2015 Campaign Organization and the former Minister of Aviation Femi Fani-Kayode, who was remanded in Ikoyi prison custody until Monday, July 4th, 2016 when court grand them Conditional Bail.
The judge also granted bail in the same sum to Mr. Fani-Kayode’s co-defendants, Nenadi Usman, former Finance Minister; and Danjuma Yusuf.
The Judge Mr. Hassan stated that each of the defendants must provide two sureties who own landed properties within the court’s jurisdiction, as well as deposit their travel passports with the court.Mr Hassan also stated that The Title Documents shall be verified by the EFCC within seven days. The sureties shall also file affidavit of means and deposit their International passport with the court.
Femi Fani-Kayode arrived at the headquarters of the anti-graft agency in Abuja in the morning of Monday, May 9, 201 in a police convoy following an invitation which was extended to him on Friday.
The accused persons are accused of diverting about N4.9 billion belonging to the Federal Government of Nigeria for political and personal uses.
After they took their pleas, their counsel, Ferdinand Orbih, Ifedayo Adedipe and S. I. Ameh, moved the motion for bail, having filed separate applications in which they prayed the court to release their clients on bail.
Advertisements
news