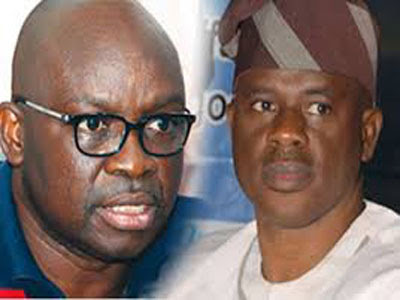 The driver that drove the money from airport to bank and spotless hotel Mr.Omotoso Olaoluwa told Economic and Financial Crimes Commission (EFCC) detectives  his role in evacuating N1.299 billion from the Akure airport for Ekiti State Governor Ayo Faose.

It was learnt Zenith Bank’s management denied that the bank funded Fayose’s election in 2014.

The Managing Director of the bank, Mr. Peter Amangbo said neither himself nor the chairman ever met with Fayose

Olaoluwa said: “On 17/6/2014 on the directive of the branch management of Zenith Bank, Akure, I went to Akure Airport to move cash to the bank. The cash could not be moved once for the first time. So we had to go to the airport the second time.

“ Some amount of money was lodge in the state branch While some money was moved to the Spotless Hotel in Ado-Ekiti together with Fayose’s aide, Mr., Abiodun Agbele.

The Money was move with three vehicles, including one bullion van and two Toyota Hilux vehicles. The two Toyota Hilux were filled with members of the Nigerian Army that provided the security.

The bullion vani drove, nobody was with me but Abiodun Agbele was in the Hilux. That was the first time I went to Akure Airport around 12pm.

While the other trip was in the evening, very late but I don’t recall the actual amount money that we moved to Spotless Hotel,the driver said”

The instruction came from  Biodun Oshode that i should move the money to Spotless Hotel. I mean the Zonal Head (around 7:30pm). We got to Ado-Ekiti Spotless around 7.30pm.

“The key to the vault in the bullion van was with one Mr. Abiodun Agbele, he did not give me any money after it was offloaded. He  later returned the key to the vault to me. Before I left the place, I checked everywhere, there was nothing in the van.”

“The allegation that Zenith Bank funded Ekiti governorship election is false.  Zenith Bank as a foremost financial institution maintains cordial relationship with authorities of states where it maintains presence.” also  the chairman of the bank, Mr. Jim Ovia, never had any audience with Fayose on the slush funds.

“As a matter of policy, we don’t fund nor support any political association in any form”.

An EFCC Investigating Officer, Tosin Owobo, has told the  Federal High Court, Ado-Ekiti how the N1, 299,490,000.00 was wired into Fayose’s accounts by Agbele.

Owobo, who swore to an affidavit, said: “That the total sum of N 1, 219,490,000 was conveyed to Akure Airport by Senator Obanikoro through a chartered aircraft with Registration No: HS125-800 5N-BMT belonging to Gyro Air Limited.”

“That on the 17th day of June, 2014 Mr. Alade Oluseye in the company of one Abiodun Agbele, a front of the applicant (Fayose), went to the Akure Airport wherein they took cash delivery of the sum of N724,500,000.00 from Senator Musiliu Obanikoro and his acclaimed Aide-de-Camp Lieutenant Colonel A.O Adewale.

“ That the total sum of N 1, 219,490,000 was conveyed to Akure Airport by Senator Obanikoro through a chartered aircraft with Registration No: HS125-800 5N-BMT belonging to Gyro Air Limited.”

“At no time did Ayo Fayose, the Chairman of Zenith Bank (Jim Ovia) and myself held any meeting at all to discuss the subject matter.