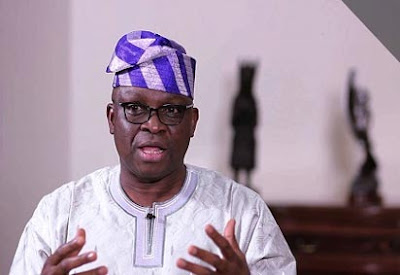 Ekiti State Governor, Mr Ayodele Fayose has said that he remained unmoved by the media trial adopted by the Economic and Financial Crimes Commission (EFCC) against him, saying “the anti-corruption agency and its collaborators in the All Progressives Congress (APC) should not be in a hurry in their ill-motive, rather they should wait till 2018 after my tenure when I will confront their lies.”
He said:


“The EFCC did more than this in 2006 but when I challenged their cooked up stories on poultry project in the court, the EFCC failed to substantiate all their allegations against me and their case crumbled like a pack of cards.”

Speaking through his Special Assistant on Public Communications and New Media, Lere Olayinka, Governor Fayose said “the EFCC is at liberty to continue to use the APC media organs to feed the public with concocted stories all in an attempt to tarnish my image, cases are only won and lost in the court, not on the pages of newspapers. If they are sure of all their claims, can’t they just go to court?

“If what the EFCC and its collaborators are now relying on is a driver or a source in EFCC that speaking for Zenith Bank, and not the former National Security Adviser (NSA), Col. Sambo Dasuki (rtd) that they claimed gave the former Minister of State for Defence, Senator Musiliu Obanikoro money to give me, goodluck to them.

“The EFCC and its spin doctors can continue to cook up stories and feed their collaborators in the media. The media trial can continue unabated, I am not moved. I am more focused, more resolute, I don’t lose battles. The one that they did in 2006 did not ultimately prevent me from having a second term as governor of Ekiti State and whatever they are doing now will also not stop me from handing over to a PDP governor in 2018.

“I will meet them in court and the whole world will again listen to their feeble stories as it‎ happened in poultry saga,” he said.

While reiterating his position that the EFCC was only carrying out the APC agenda to force him out of office or discredit him before the 2018 governorship election, the governor said the EFCC will be asked one day, why some politicians from Ekiti State now resume and close in EFCC offices in Lagos and Abuja and are the ones writing stories for publication in newspapers.

“When you read reports in their newspapers, the words and presentation are always the same and one wonders whether the two national dailies and the online medium they are using to spew their lies usually get their stories from the same source and the source even write the stories for them just for their reporters to put their names as bylines,” the governor said.