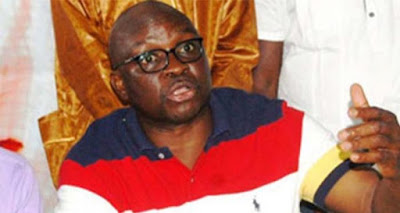 Governor, Ayo Fayose, over the weekend  why while speaking with some newsmen in Ado-Ekiti, the state capital,said those who make peaceful change impossible would make violent change inevitable.

His statement is adumbrated below:


“I am not afraid of death. I am not afraid of anything except God. I have gone through this road before. In 2006, I was charged to court by EFCC. The Falanas of this world, the Ojudus of this world and all my adversaries on the other side, they were working with Nuhu Ribadu; when they were celebrating me negatively in the newspapers; Fayose is Going, Going, Gone!
After all, they did it, I am back in the Government House now. I was incarcerated; I was in Ikoyi Prisons for almost 50 days. So when you do these things, you make me a better man. When you look at the book of James, it says, ‘Don’t be in a hurry to get out of trouble.’ When faith worketh patience in you, it makes you a better man. Sometimes food is good, fasting is better. I am not a man scared of all these. Fighting corruption is a great thing. It is good, but anything that does not represent the truth is simply corruption. Anything that doesn’t represent justice is not good. Those who make peaceful change impossible would make violent change inevitable” he said.