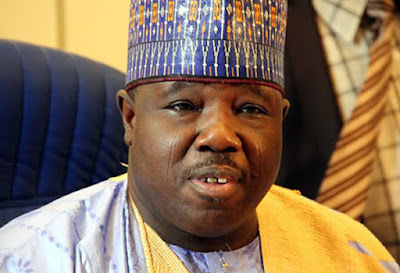 Federal High Court in Abuja Preside by Justice Okon Abang on Thursday declared as illegal the Ahmed Makarfi-led Caretaker Committee of the national leadership of the Peoples Democratic Party.

The judge ruled that the Makarfi-faction was illegal because it was a product of the party’s convention which held on May 21 in Port Harcourt, Rivers State, in defiance of an earlier order of Justice Ibrahim Buba of the Lagos Division of the Federal High Court, which had stopped the said convention from holding.

In a statement by its spokesman, Mr. Dayo Adeyeye, on Thursday, declared that what Justice Abang did was to sit on an appeal over a court of competent and coordinate jurisdiction.

Makarfi caretaker committee described the ruling of Justice Abang as objectionable, questionable and very strange in the history of Nigeria judiciary.

Punch report that, Ferdinand Obi (SAN), representing the Makarfi camp, and Mr. Olagoke Fakunle (SAN), who represented Sheriff faction of the PDP – announced their appearance for the party on Thursday.

Obi tendered the judgment of Justice A. M. Liman of the Port Harcourt Division in suit No. FHC/PH/CS/524/2016, which he said, settled issue and had ruled in Makarfi faction’s favour.

Chief Niyi Akintola (SAN)Counsel for the plaintiffs (Sheriff camp), urged the court to first determine the right lawyer to represent the PDP.Justice Abang replied that the Makarfi-led faction should answer to enable the court to determine whose appearance was legal.

The judge ruled, “Parties have an uncompromising duty to obey a court order until it is set aside. The Lagos Division made orders on May 12 and 20, forbidding the PDP from removing the Sheriff-led caretaker committee. That order is still subsisting.

“If the Makarfi-led Caretaker Committee, as apostles of impunity, missed their way to the Port Harcourt Division of this court, that court could not have conveniently assumed jurisdiction to set aside the earlier decision of the Lagos Division.

The judge said he would have voided the judgment of the Port Harcourt Division for being a nullity, assuming there was an application to that effect.

Justice Okon Abang warned politicians not to cause disaffection among judges of the High Court, saying, “The culture of impunity must stop in this country.”

Justice Okon Abang did not make a specific pronouncement on the planned national convention slated by the Makarfi camp for August 17.