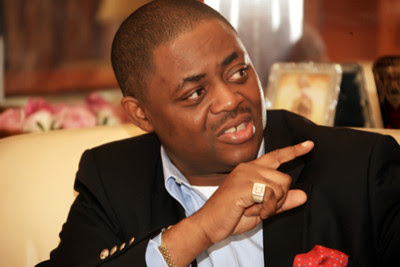 The  former Minister of Aviation, Chief Femi Fani-Kayode yesterday described his 67-day detention in prison over alleged N4.9billion fraud as the worst experience of his life.
He said his arraignment was aimed at breaking and discrediting him.
But he vowed to soldier on and defend the charges against him.
Fani-Kayode relived his experience in a statement through his media aide, Jude Ndukwe.
He said: “I give thanks to God that I am free after 67 days in detention. I thank my wife, lawyers, children and friends for all their support.
“This was the worst experience of my life but God was with me all the way. I suffered immeasurably but I count it all as joy.
“I am innocent of all charges and I look forward to defending myself vigorously in court. These charges are politically motivated and I have been severely punished for my political views and criticisms of the government.
“They are trying to silence me, break me, discredit me and destroy but as long as Jesus is on the throne this will never work. I am strong and I am bold and the struggle will continue.”
The EFCC had traced N840million to Fani-Kayode.
The cash was allegedly paid in three tranches into his account.
A top source said: “The first tranche of payment involving N350million hit the account on February 19, 2015. Another N250milion was also paid into the account on February19, 2015 while N240million was similarly credited to the account a month later; precisely, March 19, 2015.
“The balance on this account as at 31st December, 2015 was N189, 402.72.
Thenation
news