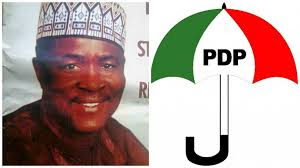 The Kogi East senatorial rerun that was held on Saturday. 23rd July,2016

A former Chief of Air Staff and member of the Peoples Democratic Party (PDP), Air Vice-Marshal Isaac Alfa (retd), has been declared winner, he polled 57, 575 votes to defeat five others. The election held in 236 of the 1,080 polling units.

However,the All Progressives Congress (APC) did not participate in the rerun due to an Appeal Court judgment which prohibited it from fielding a candidate.