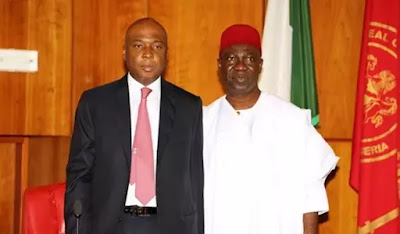 The probe of the Attorney General and Minister of Justice, Mr. Abubakar Malami, for “dragging” Senate President Bukola Saraki, his deputy Ike Ekweremadu and two others to court for alleged forgery of the Senate 2011 Standing Rules turned an anti-climax yesterday.
The AGF rattled a six-member Senate Committee on Judiciary, Human Rights and Legal Matters investigating the “imminent threat to Nigeria’s democracy” allegation levelled against Malami.
The committee, chaired by Senator David Umaru, appeared to be divided. The other members are James Manager, Joshua Lidani, Babajide Omoworare, Chukwuka Utazi and Ovie Omo-Agege.
Manager left the Hearing Room 120 venue without saying a word. Other members of the committee argued openly, before the man they were probing.
A member accused another of “trying to water down the question he asked the AGF to create a window of escape for him”.
It was obvious that Malami was enjoying himself as the seemingly unprepared senators battled to make some meaning out of his appearance before them.
The AGF waited for the committee members for about one hour, working on his white-colour mobile telephone handset.
When the committee settled down eventually, Senator Umaru told the AGF that his invitation followed a resolution of the Senate on “imminent threat to Nigeria’s democracy” due to the criminal trial preferred against Saraki and Ekweremadu.
He said the Senate had long resolved that its rule was not forged as alleged.
Umaru said his committee was mandated to get the AGF’s side of the story for onward transmission to the Senate.
Malami told the committee that he is under obligation to sustain democracy and the course of justice.
He listed the suits in court over the issue and went further to tell the committee that the police completed investigation into the matter before he was appointed.
He said: “As at the time I came into office, there existed a report of investigation into the matter. At the time I came to office, I had an obligation to file the action in relation to the investigation. The suit was filed in furtherance of the concluded investigation.”
The AGF said he had no desire whatsoever to threaten democracy. Besides, Malami insisted that the Senate lacked the power to investigate a case pending in court.
He reminded the committee that when a case is in court, no arm of government, apart from the judiciary, could look into it.
Malami quoted Senate Rules to buttress the fact that the upper chamber is barred by its own rule from the investigation of a case that is in court.
Umaru said the committee’s investigation was not on the criminal case pending in court or the civil matter also pending in court or another instituted by Senator Abu Ibrahim.
He noted that the committee was interested in looking at the situation before the case was filed.
He said: “We are not interested if there was forgery or not. We are interested to know whether the AGF exercised his powers in public interest and whether there was not abuse of power in the action of the AGF.”
The law, Umaru said, says that the AGF must always act in public interest and not abuse his powers.
A member of the committee, Utazi said that the committee was interested to know that the action of the AGF was taken in public interest “especially in a matter considered an internal affair of the Senate.”
Senator Lidani said the committee was not trying to know whether the AGF has power to initiate proceeding against anybody.
He also said the committee was interested to know if the action of the AGF was in public interest.
Lidani said the committee wanted to know whether the action of the AGF was not informed by the fact that he (AGF) was also a counsel to one of the parties in the suit on the matter.
He said: “Don’t you think that there is abuse of office; don’t you think there is conflict of interest since you were counsel to one of the parties before your appointment.
Senator Omoworare asked the AGF to be careful in his handling of the matter, “because your powers are unfettered.”
He wondered why the AFG did not honour the invitation of the committee earlier sent to him.
Umaru reminded the AGF that there was a ruling on the matter by a Federal High Court.
Malami said that his inability to honour earlier invitation was not out of arrogance or disrespect to the institution of Senate.
He said he was out of the country when the invitation came.
On whether his action was informed by public interest, he said, “I want to state clearly that my decision was purely based on public interest arising from police report.”
“Yes the Senate has power to regulate itself but the procedure amending the rule was not the procedure of the Senate.
“When the need to amend 2007 rules arose, the Senate deliberated and resolved to amend the rules. But that of the 2011 did not follow the traditional process of the Senate. The 2011 amendment did not follow the traditional procedure. There was breach of Section 60 of the Constitution,” the AGF insisted.
Umaru asked the AGF why he charged people whose names did not appear in the police report. Lidani said Saraki and Ekweremadu were not invited by the police for investigation.
The AGF insisted that because the issue is pending in court and therefore subjudice, he cannot comment on who forged the rules.
Source Thenation news
news