The Attorney General of the Federation and Chief Justice of Nigeria, Abubakar Malami, today honored the senate’s invitation where he had to explain why the Senate President, Bukola Saraki and his deputy, Ike Ekweremadu, were being tried for alleged forgery of senate standing order. Malami explained to members of the Committee why he could not honor the last invitation. “My inability to attend was out of sheer circumstances not out of disgust for Senate. I am known for a tradition of honouring invitations”he saidAddressing issues on the alleged forgery of senate standing order, Malami said the allegation predates him as the police had carried out an investigation into the matter in July 2015 and had come up with their conclusion. He said he was appointed a Minister in November same year and acted on the criminal cases forwarded to him by the police, one of which is the alleged forgery of senate order. 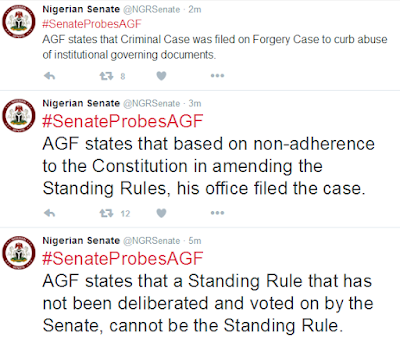 Malami said that the senate standing order being contested was never deliberated upon by the house which is against the house rule. He referred to a scenario when there was a need to amend the Senate Rules on 18th May, 2011.According to him, there was a process of deliberation. He noted that a Standing Rule that has not been deliberated and voted on by the Senate cannot be the Standing Rule. He stressed that based on the non-adherence to the Constitution in amending the Standing Rules, his office filed the case, adding that the criminal case was filed to curb abuse of institutional governing documents.Responding, the chairman of the senate committee, Senator David Umaru, said there was no need to have singled out Saraki and Ekweremadu for trial since the police investigation report did not mention them as those behind the alleged forgery. 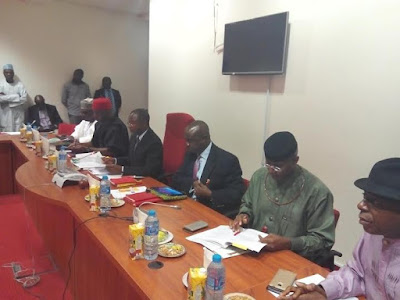 “Did it make any difference to you that Bukola Saraki and Ekweremadu were not mentioned in the investigation?” he asked.

Another member of the committee, Senator Utazi cited Section 30 of Legislative Powers Act which states that the Senate President and Speaker cannot be investigated.

“I wish to refer the AGF to Section 64 (1) which dissolves the Parliament after 4 years. In 2011, the Parliament exercised its powers to amend the documents that were handed to them by the bureaucracy. This Senate has authenticated it’s Standing Rules. You can’t import what happened in 7th Assembly into 8th Assembly. Rules are dissolved at the end of the session” he said

Another member of the committee, Senator Lidani, said it will be a disservice to try Saraki and Ekweremadu since they were not mention in the proof of evidence filed in the police report

The committee had no further deliberation. They thanks Malami for honoring their invitation.