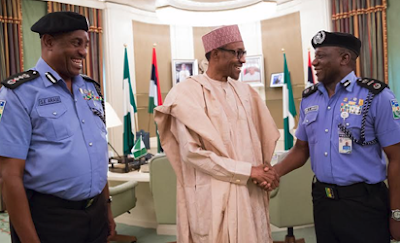 Acting Inspector General of Police, Idris Ibrahim, has alleged that his predecessor, Solomon Arase, went away with 24 vehicles including two bullet proof BMW 7 series, as he left office. According to Vanguard, Idris disclosed this while speaking with reporters in Abuja.The acting police chief also alleged that some of the retired Deputy Inspector-Generals of Police (DIG) also went away with many police cars.Idris stated that he had written Arase to return the cars, which included two official bullet-proof BMW 7 series cars, adding that the retired police chief and his DIGs had yet to return the vehicles.

He also explained that a special investigation team was already looking at the records of police vehicle purchases in the last three years as well as how they were distributed. In another report, Mr Solomon however denied the allegation saying he didn’t go away with any car, as he wasn’t ready to open a car shop. He further advised Mr Idris to face security issues.

“A week before I was announced, when you look through my office window, you could see so many cars. But the cars all disappeared when I came in. What I did was to assign a directive to the Special Investigative Unit, SFU, for them to investigate all vehicles’ purchases and donations to the police in the last three years. When I took over, there were no vehicles. I discovered that the last IG went away with 24 vehicles, including two BMWs. ‘The DIGs took seven, others eight. And they left me with an old vehicle. Even the one I follow the President with the last time I went for an engagement, the President asked what I was doing with that kind of vehicle. The headlight has changed colour, which means it was parked for long under the rain. But the new ones that were bought, including an Armoured BMW 7 series, he took them away. So, I wrote to him and reminded him of the need to return the vehicles. When a policeman retires as IG, DIG, AIG or CP he is entitled to some vehicles. And so, he should take his entitlement and return the extra. I believe four vehicles are enough for an average person. What does one need 24 vehicles for?”