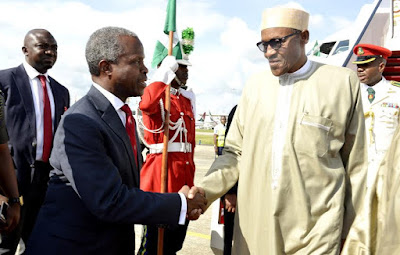 President Buhari has handed over power to Vice President Yemi Osinbajoi. Osinbajo will serve in acting capacity for the 10 days President Buhari will be away in the UK for medical checkup.
President Muhammadu Buhari has written to the Senate, notifying the lawmakers of his 10-day trip abroad for medical treatment, and his temporary handover of the government to Vice President Yemi Osinbajo.
Buhari is officially transferring power to Mr. Osinbajo for the second time since the two leaders came to power in May 2015.

President Buhari’s letter to the senate was read on the floor of the house by the deputy senate president, Ike Ekweremadu, during plenary today June 7th. This is the first time President Buhari is transferring power to Osinbajo since they both came into power in May 2015.
Source: Premium Time
Advertisements
news