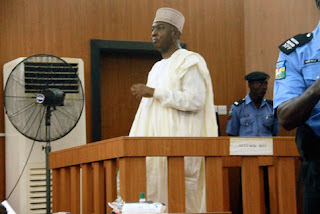 The Code of Conduct Tribunal on Wednesday, suspended the trial of Senate President Bukola Saraki on the request of the prosecution counsel led by Rotimi Jacobs, SAN.

As per PREMIUM TIMES, the tribunal representative  spokemanIbrahim Alhassan unveiled that Jacobs made the solicitation saying that his prime witness (Michael Wetkas) is to show up under the watchful eye of another court to affirm against another prominent identity yesterday in Abuja.

“Tribunal chairman Danladi Umar was at first impervious to the solicitation however we later requesting that they make a formal solicitation in composing and propose a date which the tribunal would investigate and take decision whenever the timing is ideal. As I am speaking to you, I don’t have the information of whether the letter has come to CCT or not,” Alhassan said.

In the interim, the House of Representatives has considered and passed a change to the Code of Conduct Bureau and Tribunal Act.

According to Channels TV, the amendment to Section 3 of the Act now includes a paragraph (e) which says: “upon complaint(s) of any breach or where it appears to the Bureau that there is a breach of the provision or this Act, the person concerned shall be given particulars of such non-compliance or breaches to explain before any reference to the Tribunal”..