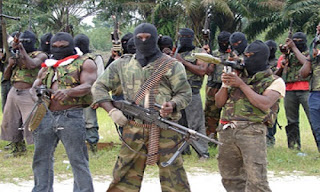 Niger Delta Avenger NDA promise to end the name Nigeria this week asking the the Diplomatic Community to stay away from the issue.
the Avenger has also promise not to attach the diplomatic community nor embassy. but to bring the name “Nigeria” to an end.
NDA have conclude to  embarrass the Nigerian Air Force, Army and Navy with their recent deployment of fighter aircraft, helicopter gunship and surveillance aircraft.

NDA informed the Government that they are in jet age where war are fought with sophisticate weapon  with Missile. 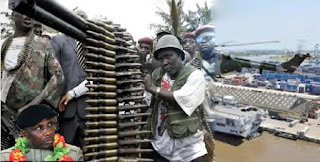 They also acclaimed that in digital age, countries are talking about Missile development, and they still condescend so low of their present obsolete equipment. This is sad indeed!”.
Accordly to Nigerianewsheadlines, the Niger Delta Avengers NDA told the federal Government that they have all the details of the equipment and military personnel that have deployed to Niger delta area,accorldy to the Avenger statement  “we are going to destroy the ones they have deployed to Escravos, Forcados in Delta State; Bonga oil field, Agbami offshore and Brass in Bayelsa; Bony in Rivers; Qua Iboe Terminal in Akwa Ibom State, and Opuekeba in Ondo State if they fails to remove them before time”. Our crack team has taken inventory of their equipments.as said by the Avengers.
How can  our area be reject with poor infrastructural development for so many years why the so called leaders are sick with ear problem disease without listen to the cry of the mass.we are going to end the name Nigeria this week.