The Independent National Electoral Commission (INEC) has offered automatic employment to an Ex-Corps member Daniel Oluwatobi, who served in Yobe State and lost his sight as a result of his involvement in a road accident while on election duty during the 2011 general elections.

Oluwatobi who served in Yobe State, was said to have lost his sight while on election duty during the 2011 general elections

Accordly to Daily Mail, the Chairman of INEC, Prof. Mahmood Yakubu, while presenting Oluwatobi  the employment letter  before the NYSC Director-General, Brig. Gen. Sule Zakari Kazaure, on Thursday in Abuja, said “the ex- corps member would be resuming in the Ogun State office of the commission on his own wish

Accordly to The Director-General, pointed out that there was the need to review the MOU between the two organizations. He particularly emphasized the need to enhance measures towards the safety of Corps members during elections as well as the review of the allowance given to them and the insurance cover.

Speaking later in an interview, Daniel Oluwatobi thanked both INEC and INEC for showing concern about his plight noting that with their intervention, he was now a happy person.

Oluwatobi thanked both INEC and the NYSC for showing concern about his plight, adding that with their intervention, he was now a happy person 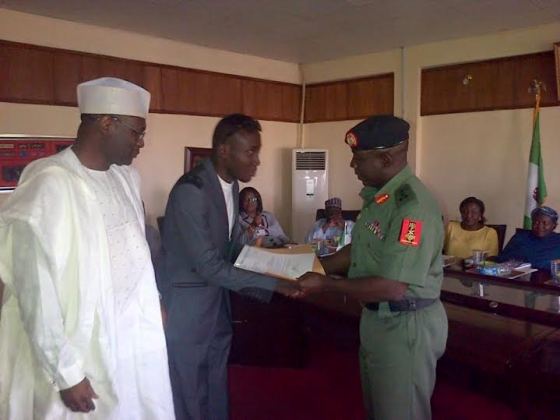