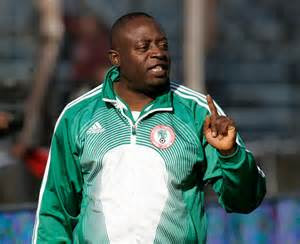 Ex-Super Eagles coach and NFF Technical Director, Amodu Shuaibu has died in his sleep this morning 11th June,2016,he complain of chest pain Friday night only to fine out this morning his late . it a great lost to Nigeria and NFF Just three days after the death of Super Eagles coach, Stephen Keshi. A statement released by the Nigerian Football Federation (NFF) this morning is stated below.

“NFF Technical Director, Amodu Shuaibu has died at the age of 58. The four – time Coach of the Super Eagles complained of chest pains on Friday night and died in his sleep. RIP Amodu Shuaibu’s death comes three days after that of former Super Eagles Captain and Coach, Stephen Keshi.” 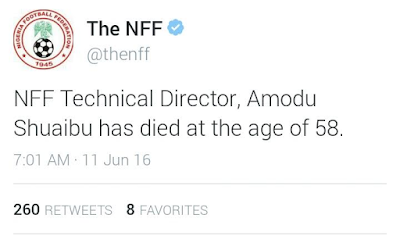 Amodu was born on April 18th 1958 and played as a striker before ending his career after a leg injury.  May Allah grant him eternal rest.

Until his death, Amodu was in charge of the Super Eagles as supervisor, whileSalisu Yusuf managed the team.May his soul rest in Peace…Amen!