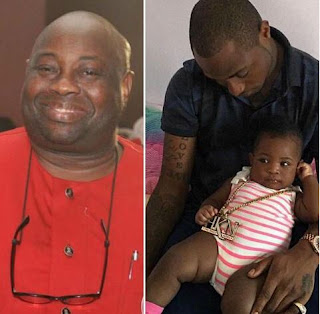 Even though Dele Momodu and the Davido may have squashed their beef on social media. A lot still believe their is still bad blood betwen them as Davido is using his name in his music.In one of his songs he said Dele Momodu si na chi. While in another he sang ‘ Dele na my boy, dele na my boy’
In a brief interview with Joy News, The Ovation boss, Dele Momodu aired his opinion on the Dele na my boy lineHe said “Fans can misled people sometimes. Well that’s what most music artistes all over the world do. He is using it to sell his album. He wants to sell his records, so he had to create controversy, to make that happen.
I don’t know why you are talking about it now, as far as i’m concerned, he is just selling his records, because I don’t think David will see me face to face and call me his boy. I’m his father.I’m comfortable with that, I can’t fight my own child and we are also connected for life through that child (Imade).He called me his boy, do I look like any body’s boy? No! So what are we not saying! ‎”