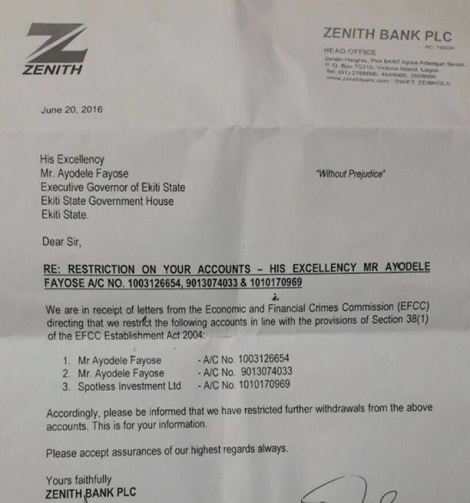 This letter was supposedly sent by Zenith Bank Plc to Ekiti State Govenor, Ayodele Fayose. It was to educate him of the limitation on his bank account because of a mandate from the Economic and Financial Crimes Commission (EFCC).

Governor of Ekiti State, Ayo Fayose had restriction placed on his account with Zenith bank couple of days back.

A photo of the letter reportedly sent by the bank to Fayose informing him of the restriction on his accounts due to a directive from the Economic and Financial Crimes Commission (EFCC), has now surfaced online. See photo above;

This was a comment by nairaland member stated below:

I’m very happy this is confirmed.

Shame on those defending the looters who made them pauper by diverting our common wealth into their personal accounts.

Fayose as a sitting governor enjoys immunity from prosecution for all criminal and civil offenses he has committed. Does it make sense that he should also enjoy his stolen wealth?

You mean the immunity should make him spend such money undisturbed? That will be unjust and wicked to those wronged by his unpatriotic action. It will be arrant nonsense!

The funny thing is that this thugnor has on several occasions boasted that PMB cannot do him a thing. Now that his accounts have been legally frozen, let’s see what he can do to force it unfrozen.

My General in ASO Rock is fearless. So, feel free to shout on top of your voice. It won’t change anything.

If Fayose feels his right has been tampered with, let him sue EFCC to court. Shikena.