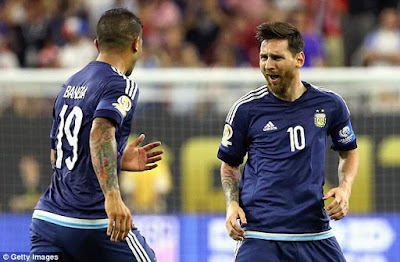 Lionel Messi is now Argentina’s all-time leading scorer with 55 goals, overtaking Gabriel Batistuta as his nation’s top scorer after leading his country to a 4-0 win over U.S in the Copa America early this morning.
Lionel Messi lit up the Copa America semifinal on Tuesday night when he led Argentina to a 4-0 rout of hosts, the USA.
The Argentina captain was at his ethereal best after some back problems in the group stages of the tournament.
He scored one and had a hand in everything that was good about his team that the Daily Mail gave him a score of 10.
Messi got the result going as early as the third minute as his chipped pass into the box got on the head of Ezequiel Lavezzi to give Argentina the lead.
He added the second with a sublime free kick in the 32nd minute to kill the game.
Ezequiel Lavezzi scored through a header after just three minutes before Argentina captain Lionel Messi doubled their lead with a stunning free-kick which was his 55th goal – making him Argentina’s outright record goalscorer.
Napoli striker Gonzalo Higuain added a third from close range on 50 minutes before Higuain doubled his tally for the night on 86 minutes via a Messi assist making it a miserable match for the U.S.
Two more goals in the second half from Gonzalo Higuain sealed the emphatic victory and they await the winner of the second semi-final between Chile and Colombia.
Messi had gotten even with Gabriel Batistuta on 54 goals when he scored in the quarter final win over Venezuela but he now stands alone with that record with 55 goals in 112 games for his country.
The goal he scored was a fitting way to break Batistuta’s record – a simply gloriously lofted ball that almost clipped Brad Guzan’s right-hand post.
His manager, Gerardo Martino, had expressed the hope that his maestro would break the scoring record and that has now been confirmed.
Almost everything positive came through the Barcelona No 10. In the eighth minute he fired over, then eight minutes later sailed past three players before Guzan fielded his strike from the edge of the box but the next time Messi ran at the defence, it resulted in a goal.
The U.S team started with a line up that included Guzan, Yedlin, Cameron, Brooks, Johnson; Zardes, Beckerman, Bradley, Zusi; Dempsey and Wondolowski while Argentina started with a ‘killer’ squad that comprised of Romero, Mercado, Funes Mori, Otamendi, Rojo, Augusto Fernandez, Mascherano, Banega, Messi, Higuain and Lavezzi.
Argentina will now face the winner of the match between Chile and Columbia in the Copa America final. 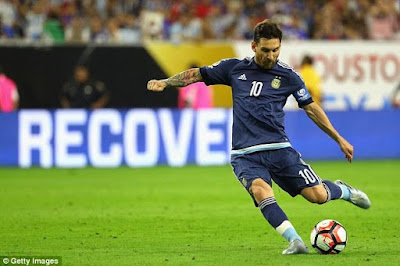 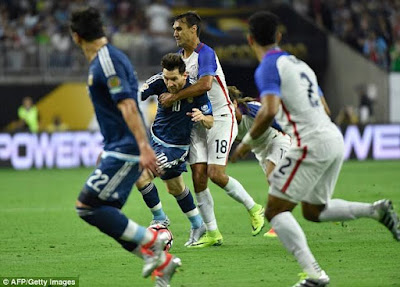 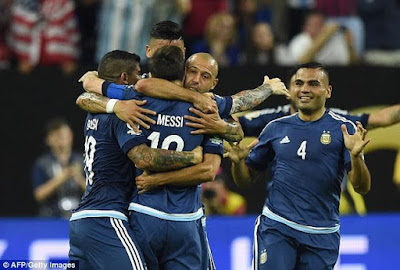 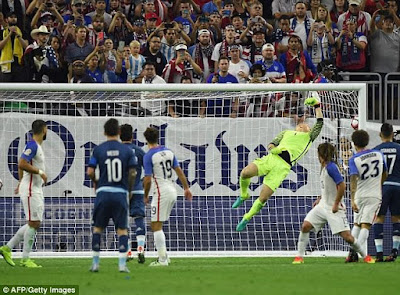 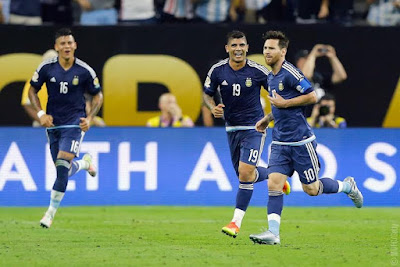 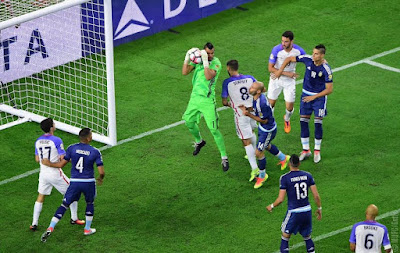