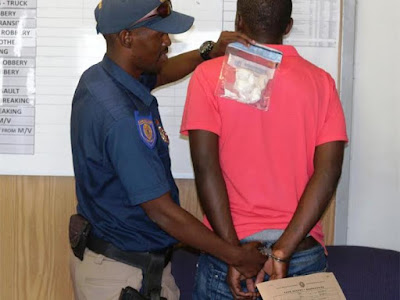 Members of EMPD Drug Enforcement Unit on Tuesday, April 26, arrested a 30-year-old Nigerian national for possession of drugs at a block of flats at the intersection of Rietfontein Road and Second Street, in Boksburg North, South Africa.
According to EMPD spokesperson Lieut-Col Wilfred Kgasago: “On Tuesday, April 26, a block of flats in Boksburg North was staked out for a couple of hours by EMPD Drug Enforcement Unit members following receipt of information about a suspected drug-dealer,”
Kgasago said a man fitting the description appeared at around 11am, after the block of flats had been observed for about three hours.
“He was found in possession of drugs and was arrested.” Kgasago added that the drugs were confiscated. “A total of 38 ziplock bags of cat, worth R3 000 on the streets, were found on the said person,”
The man was taken to the Boksburg North Police Station and charged with possession and suspected dealing in illicit substances. He is expected to appear in the Boksburg Magistrates Court soon.