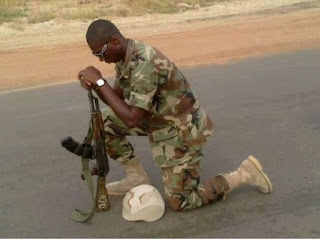 Mrs. Akparobi Orobogha, was yesterday allegedly shot dead by one of the soldiers deployed to enforce the no- movement restriction during environmental sanitation at Jakpa Junction, Uvwie council area of Delta State. one of soldiers stopped the tricycle conveying Mrs. Orobogha from the wedding ceremony at the roadblock but the rider refused to comply.

One of the soldiers, according to the family members of the deceased, fired a shot at the fleeing tricycle which allegedly killed the woman.
Military sources however countered the bride’s mother died from a bayonet injury fired by one of the soldiers.
First child of the deceased, Alero, who was speaking from Ekpan Police Station where the case was reported, said the killer-soldier had been whisked away by members of the JTF contrary to reports that he has been arrested.
She said colleagues of the killer-soldier at the roadblock where the incident happened have been taken to Warri Area Command for interrogations.
JTF whisked him away. His colleagues that were at the road block together are now at Warri Area Command.
“It was my mom that was shot, not my sister that is wedding today. She was coming from the wedding,” Alero said.
A senior army officer at the 3 Battalion of the Nigerian Army, Effunrun Barracks, who craved anonymity, debunked claims that the deceased was shot.
He said it was a bayonet that unintentionally pierced the women.
He added the soldiers involved in the incident had been rounded off by the Army for interrogations.
Confirming the incident, spokesperson of the Delta State Police Command, Celestina Kalu (DSP), said the case was already being investigated.
He however said no arrest had been made by the Command yet on the case.
Asked to clear the air on the controversy over the killing, the police image maker said the Command will wait for the autopsy report before giving any information.
According to him: “It’s not in our place to give an expert opinion on what it really was; whether a gun wound or a bayonet wound.
SOURCE :THENATION
Advertisements