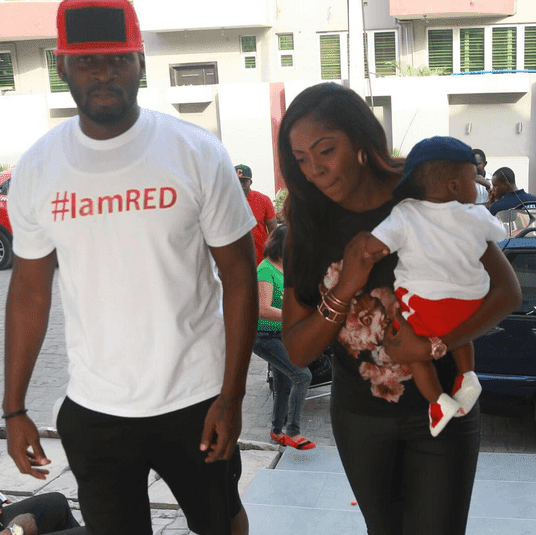 “My eyes don see something. My ears don hear, and my mouth sef, I for talk something join.”

“No be dis Tiwa Savage and him husband matter? The husband wey say him wife offend am, he no gi am food, him wife dey form for house but him dey open leg for other men, and na another woman they give am edible catering, and the man come vex he wan jump inside river for Lekki-Ikoyi bridge”

“Who the hell are you talking about?”

“Tiwa Savage and her husband”

“And who are those?”

“Tiwa, now. Marvin First Lady.  She is one of Nigeria’s topmost female artistes. And her husband.  They are quarrelling. The husband tried to commit suicide. She says her husband prefers to follow other women, take cocaine and ignore his responsibilities as a man and a husband. Social media is agog with the news. Mainstream media is feeding on it too. The man even tried to jump into the Lagoon.”

“No. He was restrained by Banky W and Peter Okoye.”

“And who are those? Red Cross Officials?”

“You are in this country and you don’t know Banky W and Peter Okoye?”

“There is no way anyone can possibly know all the members of the Red Cross? ”

“They are musicians, not Red Cross, not NEMA”

“Don’t tell me you are one of those dumb ones who do not know what is going on in this country?”

“I don’t get it. Am I supposed to worry about how Tiwa Savage and her husband are savaging the public space with their dirty linen and turning their marriage into a subject for beer parlour gossip?”

“It is a serious matter.”

“Oh really? So, how has their matter affected the supply of petrol, the price of foodstuffs and the payment of salaries?”

“It is the biggest news of the week.”

“Of course, because the media does not know what to prioritise anymore”

“There are issues involved. Tiwa Savage’s husband wanted to commit suicide. The same week, there was a report about a man who killed his target of amorous desire and stabbed her mother  in Ilorin because the lady refused to love or marry him.”

“Love is the most potent poison in the world. The graveyard is a prison yard of unrequited love.”

“You keep mentioning the wife.  That husband doesn’t have a name? They should have allowed him to jump into the Lagoon, and have his wife do a special song at his funeral and go home on the left arm of another man.”

“They call him em em. actually that is the problem if you would listen to the wife. She is the breadwinner, she says and the man likes to squander money and so on and so forth.”

“Look, I am not interested in that story.  I don’t want a taste of Tiwa Savage’s #Lemonade. I don’t want any tales about the #Becky-with-the-Big-Hair that served her husband “edible catering”. Or do you want the National Assembly to have a special session on a derailed marriage, or may be you want President Muhammadu Buhari to issue a statement on it? One of these days, Nigerians will start insisting that the Nigerian President should become a marriage counselor and he will be blamed for marital squabbles.”

“We are talking about celebrities. And come to think of it, in a normal country, Tiwa Savage’s husband will not have to depend on his wife. He will have a proper means of income.”

“E ma gba mi ke. Doro Tiwa and husband fight and Nigeria no go hear word? E joor oh. As you lay your bed, you lie on it. These things happen every day. Human beings pay for the choices that they make. They learn from the outcomes of their choices. Can we have the media focus on serious matters beyond sex, infidelity, cocaine and the poverty of matrimonial matters in the household of Tiwa and Tee Blliz? Which kin name be that sef?”

“You want them to scream for help?”

“Yes, because the Nigerian worker today is hungry, angry, sinking, helpless, jobless, over-used, under-paid and in despair. State governments are not paying salaries. Companies are retrenching staff.  The latest I read is that First Bank is planning to sack 1, 000 workers, Aero Contractors, 100.  I know a couple, who have both just lost their jobs and they have five children. Some other companies are closing shop. Massive divestiture in the economy.”

“Incidentally, you know the people who caused the melt down. “
“Tell me”
“I don’t know.”

“If you don’t know, then you don’t know, before you say something that will make me give you a punch in the face. But I think all that President Buhari needs to do tomorrow is to give the people hope.  In a situation like this, you give the people hope, you reassure them.”
“You are recommending rhetoric. Speaking for speaking sake.”
“No. I am saying hope is a strong weapon. When a leader gives the people hope, he calms down their blood pressure. It is a strong pill.”
“The Nigeria Labour Congress and the Trade Union Congress are not asking for hope. Nigerian workers know what they want. They are asking for N56, 000 minimum wage.”
“Chai”
“You heard me. N56, 000”
“Chai. Do they live in this country at all? Do they have economists among them? Does it make sense to ask for what you know you cannot get?”
“You can ask for what you think you deserve.”
“But in matters like this, you look at the economy too. What they are asking for is called wage indexation. That is not sound economics. Wage indexation is a self-fulfilling prophecy. If you base your calculations on it, there will never be an end to it, and it will undermine the economy.”
“Which economy? An economy where some people grab N2 billion, and millions of dollars all in the line of a day’s arrangement, and workers cannot get the existing N18, 000 minimum wage?”
“If I were the NLC or TUC leader, I’ll be more interested in giving the government ideas about how to pay the current minimum wage and ensure that the welfare of the people is properly the concern of government. NLC should be pragmatic. Get all salary arrears paid to start with, and get government to pay all emoluments as at when due. Uncommon sense.”
“Sorry, Labour leaders don’t claim that they are economists. They just want the best for the Nigerian worker. That is their mandate.”
“Don’t speak for them. When they meet the President and the Governors tomorrow, let them say so. I wonder if anybody even reads those long speeches on Labour Day. Nigerian workers are looking for unpaid salaries, but their leaders ride exotic SUVs, and live in mansions. I beg.”
“You are beginning to sound like a government spokesperson. Come, are you still one of us?”
“I beg”
“By the way, what do you think is likely to happen in the People’s Democratic Party (PDP), now that the party leadership says the Chairman of the party must come from the North East, and the South West members are threatening to pull out?”
“Are you sure anybody in the South West is threatening to pull out?”
“Yes. You don’t read the papers? Na one of your brothers even talk am”
“Who?”
“The Lion himself”
“A lion in my family?”
“Have you forgotten so soon? Abi as your phone no ring again, your brain no ring too? You no know the attack dog, the Lion?”
“Lion. Attack dog.”
“Hen hen now. Him say if they don’t make somebody from South West the Chairman of the PDP, the South West wing of the PDP will leave the party.”
“I’ll advise you not to lose sleep over what politicians say.  What you can be sure of though, is that before 2019, there is likely to be interesting re-alignments.  Nigerian politics may not be the same again before and after 2019.”
“Na dem sabi. Make they just give us the mekunnu, power, good roads, jobs and our salaries at the end of the month. Me, talking for meself, I don see say e no matter which party win election, as long as the economy dey kampe and man fit chop, pay school fees and get light to do welle for night. My broda, na the better thing wey matter pass be dat.”
“What is welle?”
“You no know Welle?”
“No”
“Kai. Lord of Heaven. No be the thing wey dey cause problem between Tiwa Savage and her husband be dat?”
“I still don’t get it.”
“You no watch her interview?  As the girl they talk, dey cry, without make up, looking like an angel, doing her eye like this, her shoulder like that, e just dey pain me say dem no allow the husband jump for inside river. If I see Banky W and Peter Okoye, hen, the kine slap wey I go give dem.”
“Are you alright? Have you been sniffing cocaine?”
“C’ommot there. You just carry book for head, you no know how life be?”
“I am sorry for you.”
“Sorry for yourself.”
“Na you go sorry for yourself. And why your head dey always shine like this? You no get hair? You never reach old age, your head don become desert. Na people like you women dey look for?”
“This is a special haircut, you can see that the shaving of the hair is completely clean.”
“This is not a haircut. This is called desert encroachment, or the desertification of the human skull”
“I did it this way, in the shape of a shining mirror, in solidarity with the people of the Edo Kingdom who have just lost their revered monarch, the Omo N’Oba N’Edo Uku Akpolokpolo,  Erediauwa I”
“Only Benin sons are required to do gorimapa in honour of the great king that has ascended to the rafters.”
“There is no law that says other Nigerians cannot honour a revered monarch who kept the dignity of the throne and left behind a legacy of honour, character, royal grace, and dignity.”
“You don spake my broda. Make I add my own; Oba gha to kpere”
“Ise-ee”
“May his path to the great Beyond be one of illumination and grace.”
“So let it be.”
“So mote it be.”