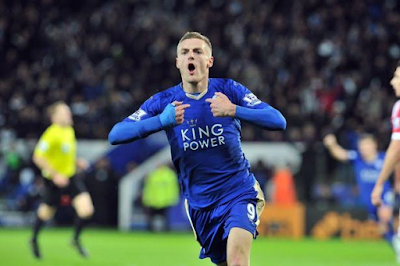 Leicester City top scorer Jamie Vardy has won the Football Writers Association (FWA) footballer of the year award after having a record breaking season with Leicester City in the Premier League.It’s been a fairy-tale year for Jamie Vardy, who has scored 24 goals for the Foxes and England this season. He has became an England National team regular this year.As is already well known, Vardy’s incredible rags to riches life story will soon be turned into a feature length movie to be premiered in Hollywood.
The FWA website posted on Monday:

‘The England international collected 36% of members’ votes, making him a clear winner ahead of Foxes’ team-mates Riyad Mahrez and N’Golo Kante.

Vardy is now the first Leicester player to win the prestigious accolade, which has been running since 1948, and the first Englishman to be voted FWA Footballer of the Year since Scott Parker in 2011.