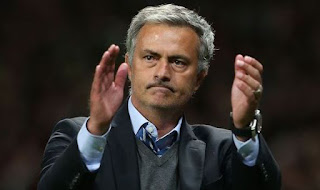 The Portuguese coach, who has said he is hoping to return to the Premier League this summer and could therefore be competing with Leicester for the title next season, told CAA Sports: “I want to congratulate everyone connected to Leicester; players, staff, owners and fans.

READ MORE
The chart that shows how Leicester’s budget was dwarfed by rivals
“I lost my title to Claudio Ranieri and it is with incredible emotion that I live this magic moment in his career.”

Mourinho’s words of congratulation for Ranieri are all the more significant in light of his past comments about the Italian coach. When asked why he was brought in to replace Ranieri at Chelsea, Mourinho said: “In 2004, after coming to Chelsea and asking why Ranieri was replaced, I was told they wanted to win and it was never going to happen with him. It is really not my fault if he was considered a loser at Chelsea.”

In a separate interview Mourinho said of the Leicester manager: “Ranieri…has the mentality of someone who doesn’t need to win. He is almost 70 years old. He has won a Supercup and another small trophy and he is too old to change his mentality.
“He’s old and he hasn’t won anything. I studied Italian five hours a day for many months to ensure I could communicate with the players, media and fans. Ranieri had been in England for five years and still struggled to say ‘good morning’ and ‘good afternoon.'”