Cristiano Ronaldo scored the winning penalty as Real Madrid won the Champions League for the 11th time in their history in Milan on Saturday night,Sergio Ramos gave Real the lead in the 15th minute but, after Antoine Griezmann smashed a penalty against the bar, substitute Yannick Ferreira-Carrasco made it 1-1 with 11 minutes remaining to send the game to extra-time.

Sergio Ramos put Real Madrid in front with a goal that looked off-side but they recovered in the second half with Carrasco equalizing from Juanfran’s cross. The Atletico right back had typified his team’s spirit in the comeback – it was so cruel on him to be the man to miss.

At the other end of the pitch Bale was setting the tone too. He robbed Griezman brilliantly to turn defence into attack once more. Real were playing with incredibly intensity – a little too much in the case of Dani Carvajal who flew into Griezmann and was booked but only after English referee Mark Clattenburg appeared to be influenced by Simeone’s reaction – leaving his technical area outraged at the challenge.

Ronaldo had the chance to win it and he fired home to give Real their second victory in the competition in the last three years with 5-3 penalties shootout, christian Ronaldo ripping off his shirt in celebration. 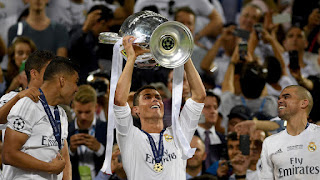 It is the 11th time Real have lifted the trophy – four more times than any other club – while Atletico have now been beaten three times in the final.

congratulation to Real Madrid players,  coach Zinedine Zidane for nice job both as player and as coach.