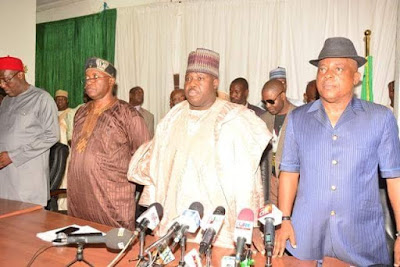 Taking after the rehashed activity by the APC to accuse the quick past government and gathering for all the hardship without further ado being confronted in the nation, the PDP hosts asked the decision get-together APC to stop habitual pettiness and think of answers for location the issues pestering Nigerians. PDP Chairman, Alimodu Sheriff said this while introducing four boards in the PDP in Abuja today April fifth

“The leadership of the party share the pains of Nigerians after one year in office of the All Progressives Congress-led government. Nigerians now have the opportunity of comparing the PDP and also the APC. The ultimate judge of this exercise are Nigerians. ‎Instead of the APC addressing the problems of the country, the ruling party has kept blaming the PDP for lack of petrol in the country. I saw the other day a publication by one of the leaders of the APC that we are responsible for lack of petrol after their one year in office. I would like to advise the leaders of the APC to stop blaming us in the PDP, we are now in the opposition party, repositioning our party to show Nigerians that we could do better.”