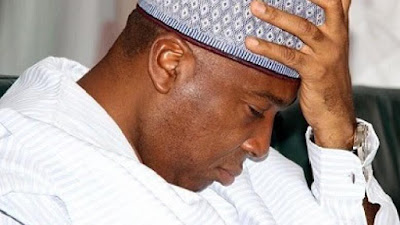 As his trial at the Code of Conduct Tribunal commenced yesterday April 5th, some senators have advised Senator Bukola Saraki to resign his appointment as the Senate President before he is disgraced out of office. This advise comes as the number of senators who escorted him to the CCT trial dropped to 23 yesterday April 5th. When the trial initially started, 81 senators followed him to the tribunal.
According to Vanguard, the advise was given to him at a special meeting he held with some of his loyal senators who followed him to his Maitama residence shortly after the end of yesterday’s trial at the CCT. One of the senators who spoke on condition of anonymity said

“I can confirm to you that at a special meeting held yesterday, we asked the Senate President to consider the option of resignation. We believe that doing so would preserve the institution of the Senate“he said