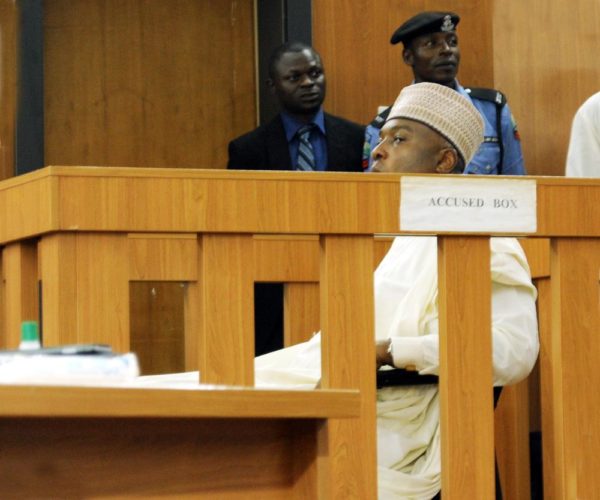 PIC. 4. SENATE PRESIDENT BUKOLA SARAKI AT THE CODE OF CONDUCT TRIBUNAL WHERE HE WENT TO TAKE
HIS PLEA IN THE 13-COUNT CHARGE SLAMMED ON HIM OVER ALLEGED FALSE DECLARATION OF HIS ASSETS, IN
ABUJA ON TUESDAY (22/9/15).
6772/22/9/2015/HF/CH/BJO/NAN
Senate President, Bukola Saraki‘s trial at the Code of Conduct Tribunal continued today after his motion for adjournment was denied.An EFCC detective testified against the former governor saying, he received sums of money between N600,000 and N900,000 from his personal assistants, one 50 times and the other 20 times in a single day.
He also said numerous petitions were written against him during his tenure as governor. According to him, former EFCC boss Ibrahim Lamorde  in 2014 set up a team (which he was part of) to investigate the Senate President after he received intelligence reports of fictitious transactions by the defendant (Saraki).
The detective said,… because of the suspicious inflows into the account, the bank (GTB) officials were invited. The reason for the invitation of the officials was that some of the individuals who were making the cash lodgement into the account were bank officials.
One Oluwa Tujimu reported to the commission. From our of interactions with him, we discovered that some of the lodgements were made through a superior at the bank, Bayo Daudu, who was the relationship manager of the account. In our interaction with Daudu, it was discovered the cash sums were handed over to him by the defendant for lodgement in the account. According to Daudu, he goes to Kwara state government house to collect the money from the defendant for lodgement into the account at the GRA Ilorin branch of GTB.
We discovered one name, Abdul Adama who made transaction 50 times into the account in a single day. The sum was broken down to N600, 000 and N900, 000, and was lodged in the same day.
Subsequently, after that one Ubi made a lodgement on the same day about 20 times in the same range of N600, 000 and N900, 000, we looked for Adama and invited him. He reported that the cash sums were handed over to him by the defendant and stated further that the cash sums that were lodged in by Ubi into the same account were from the defendant.
Adama and Ubi were personal assistants to the defendant while he was governor. Further investigations revealed that other individuals who made lodgements into the account were fictitious. GTB said they had done the needful by reporting the suspicious transactions to FIU.
Source: TheCable
Advertisements