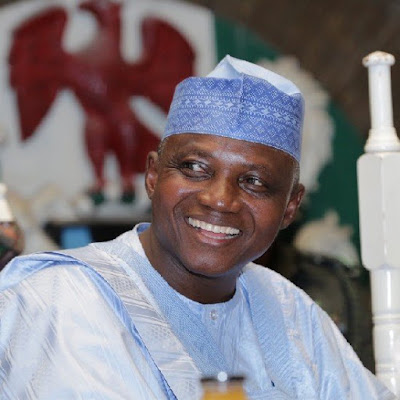 Our attention has been drawn to a newspaper publication of an interview granted by Mallam Garba Shehu, Senior Special Assistant to the President on Media and Publicity, which was published in the DAILY TRUST NEWSPAPER of Sunday March 27, 2016. In the said interview, while responding to a question on whether the president would probe his predecessor Goodluck Jonathan, Mallam Garba Shehu alluded to the fact that the erstwhile Office of the National Security Adviser (ONSA) was at the head of all the corruption which went on in Nigeria. He then went further to reportedly state the following:

“The former Chief of Defense Staff is someone whose country home came under attack.  In fact his own community had been seized by Boko Haram up to three times. Then they gave money to go and buy weapons to secure your own community but you would rather build palaces in Abuja…”.

This is a deliberately false and misleading statement by Mallam Garba Shehu which was invidiously calculated to tarnish the unblemished professional reputation of a distinguished professional who has spent the better part of his life protecting and defending this country from external aggression and securing the  territory of the Federal Republic of Nigeria.
It is a fact of indubitable notoriety that the former Chief of Defense Staff Air Chief Marshall Alex Badeh (Rtd) is currently facing criminal charges in the Federal High Court, Abuja. It is also common knowledge that the facts alleged against the former Chief of Defense Staff to which he has entered a “Not guilty” plea, has absolutely nothing to do with the Office of the National Security Adviser, nor are there any allegations of “money collected in the name of security”. That the Senior Special Adviser to the President on Media and Publicity who is or ought to be aware of the nature of these allegations would go on public media and regurgitate such diabolic falsehoods is a manifestation of the basest form of professional deception and callous indignity.
In a further and unparalleled display of crass, Mallam Garba Shehu proceeded to falsely state that the former Chief of Defense Staff went on to build palaces in Abuja with monies given to him to buy weapons to save his community from the menace of Boko Haram. This blatantly false statement is a wicked attempt to calumnize the former Chief of Defense Staff and cause disaffection between him, members of his community and the Nigerian public at large. First of all, there is not a single allegation in the charges against the former Chief of Defense Staff that he built palaces in Abuja with monies given to him to procure arms to secure his community. Secondly, it is quiet pedestrian and irresponsible of the Senior Special Assistant to use the scourge of the Boko Haram terrorist activities to score cheap political points being fully aware of the thousands of deaths and injuries caused by this terrorist group, and the fact that no one including President Muhammadu Buhari who was also attacked by the same group, is exempt from their terrorist and nefarious activities
The Senior Special Adviser may have forgotten that Section 36 of the Constitution of The Federal Republic of Nigeria, 1999 (as amended) creates the sacred and constitutional doctrine of presumption of innocence. It is therefore a matter of grave concern that he would make such unguarded pronouncements about a matter which is currently sub judice, and to which the former Chief of Defense Staff has pled “Not Guilty”.  This again is a hollow attempt to unduly interfere with the functions of the judiciary, a conduct which is repugnant to the constitutional principle of separation of powers.
While one may excuse the attempt by the Senior Special Assistant to garner publicity by the proclamation of headline-grabbing utterances which do not have a modicum of truth, it is simply unprofessional for a person of his status to engage in these careless remarks and comments about a matter which is presently being adjudicated before a court of competent jurisdiction.
The Senior Special Assistant on Media and Publicity should rightly direct his Media and Publicity functions to addressing the increasingly deteriorating plight of the good people of The Federal Republic of Nigeria whose welfare should and ought to be his primary concern, rather than continuing in this woeful attempt to deliberately mislead the public.
Samuel Ndubuisi
Advertisements