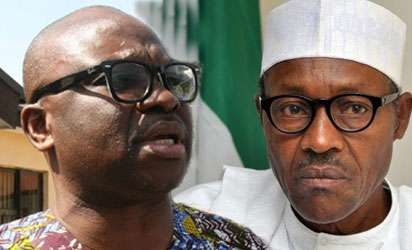 Perused the press articulation underneath…

Ekiti State Governor, Mr Ayodele Fayose has said that the Federal Government was wanting to force more hardships on Nigerians by expanding Value Added Tax (VAT) from the present five for each penny to 10 for each penny, portraying the move as inhumane to the predicament of Nigerians who are experiencing the awful monetary strategies of the President Mohammadu Buhari drove All Progressives Congress (APC) government.


Vice President Yemi Osinbajo had said on Thursday, in Lagos that the current five per cent VAT rate in the country was very low, and went on to add that the Federal Government would increase the taxpayer base this year. Reacting through his Special Assistant on Public Communications and New Media, Lere Olayinka, Governor Fayose said any increment in VAT or any other tax being paid by Nigerians at this time will further make life unbearable for the people.“Nigerians are suffering and the little that they have, federal government is planning to take back through VAT increment, this is wickedness! “Under three months, electricity tariff was increased despite epileptic power supply, N50 stamp duty was imposed on bank customers for money received into their accounts via electronic transfer, cash and cheques; petrol is being sold for as high as N400 per litre and now they are talking about increasing VAT to 10 per cent, this is the height of insensitivity to the plight of Nigerians,” he said.The governor, who lamented the increase in the cost of living of Nigerians, occasioned by the bad economic policies of the Federal Government, said “even recent figures from the National Bureau of Statistics (NBS) revealed that prices of food have hit a record high and inflation is worsening.“How can government be considering 100 per cent increment in VAT when businesses are folding up, prices of essential commodities have skyrocketed, millions of Nigerians are losing their jobs and those who are still employed are no longer getting paid regularly? “For even contemplating the increment of VAT at this difficult time shows that the Buhari-led government does not care about the welfare of the citizens and only God will save the poor masses from the hands of this government.”Governor Fayose said rather than imposing more hardships on Nigerians, President Buhari should seek help from experts on how best to revive the country’s economy, adding that; “As at today, the Buhari-led government is yet to show that it has any clue to the revival of the economy.”