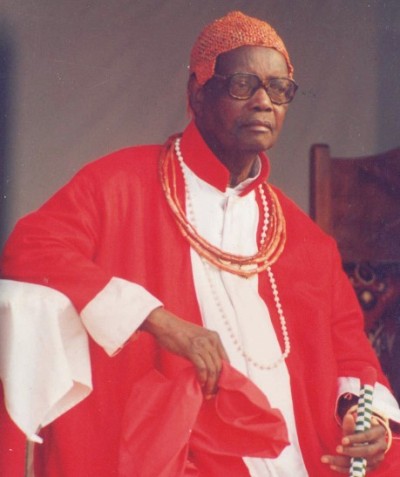 Abuja, April 29, 2016 (NAN) President Muhammadu Buhari has expressed sadness over the passing away of the highly revered traditional ruler of Benin Kingdom, Omo n’Oba n’Edo Uku Akpolokpolo, Oba Erediauwa.
A statement issued in Abuja on Friday by the president’s Special Adviser on Media and Publicity, Femi Adesina, said president Buhari described the death of the Oba as a great national loss.
President Buhari extended his condolences and that of the Federal Government to Gov. Adams Oshiomhole, the people of Benin Kingdom and Edo State on the passage of the beloved monarch, who had ruled over his people since his ascension to the throne in 1979.
The President also extended special commiserations to Crown Prince Eheneden Erediauwa and other members of the late Oba’s immediate family.
President Buhari assured them of the fullest sympathy and solidarity of the federal government and all Nigerians as they mourned the late Oba.
According to him, Oba Erediauwa will always be remembered as one of the most outstanding traditional rulers of his era.

“As the late Oba goes to join his very illustrious royal ancestors, President Buhari believes that his place of honour in the history of the Benin Kingdom and Nigeria has been assured by his long and highly successful career as a public servant, administrator and chief custodian of the much celebrated culture and traditions of his people,” the statement added.

The President prayed that God Almighty would receive the late Oba’s soul and grant him peaceful repose.
He also prayed that God would grant “Crown Prince Erediauwa the wisdom and courage he will require to build on the laudable legacies of Oba Erediauwa.”
The National Chairman of the All Progressives Congress (APC), Chief John Odigie-Oyegun, on Friday said the late Oba of Benin ruled his kingdom with wisdom.
Odigie-Oyegun said this in a statement released to newsmen in Abuja‎ by the party’s Assistant Director (Publicity), Edegbe Odemwingie.
A palace chief broke a chalk in two this evening to signify the king’s passing away.

”Oba Erediauwa’s reign brought distinction, class, wisdom and integrity to the several centuries of unalloyed tradition and custom of the ancient Benin Kingdom; the traditional institution in Edo state and the country at large.
”As a ‎unifier, ‎Oba Erediauwa ‎used his revered position to promote national unity”, the statement said.

‎The statement recalled decades of meritorious and unblemished record of service the late king rendered to the nation as a seasoned and thorough-bred bureaucrat‎, rising to the peak as a Federal Permanent Secretary.

”Indeed‎, Nigeria will always remember the Benin monarch who protected the traditions and values of his people and who was also a champion of national unity.
‎‎”Oba Erediauwa’s transition marks the end of a very illustrious era. May the Almighty God and the ancestors grant the Oba of Benin eternal rest.”‎