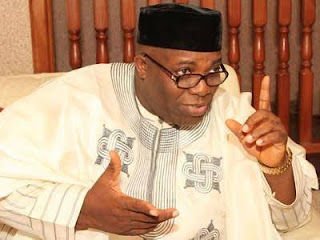 Ahead of the PDP National convention where new party leaders including the National Chairman will be elected, former aide to former President Jonathan, Doyin Okupe, says that failure of the party to consider a Yoruba man as the new party chairman will make some of them reconsider their membership of the party. Okupe said this in an article he shared on Facebook today. Read it after the cut
There is an embarrassing falsehood being propergated by political charlatans from the southwest and some influential collaborators in the top echelon of the Pdp.

The seed of this misrepresentation was sowed by a group of political clowns and court jesters under the leadership of Senator Buruji Kashamu, a political impostor who claims he is the leader of the party and the Yorubas in the Southwest.
On the 21st of April 2016, the cream of the authentic Yoruba leadership in the southwest gathered at the Golden Gates Hotel on kingsway road, ikoyi, under the Chairmanship of Chief olabode George, a retired Air Commodore, Fmr Governor, former Dep. National Chairman of the Pdp and a grandson of the revered, legendary and world acclaimed, distinguished Yoruba Icon and Politician,
Sir Herbert Macaulay.
At that meeting the true sons and daughters of Yoruba land in an unprecedented unity condemned the erstwhile claim by the Yoruba Traitors who went and lied to the PDP chairman, His Excellency Sen Ali Modu Sheriff, that the Yorubas do not want the chairmanship of the pdp.
I want to state categorically here, without any fear of equivocation, that We the Yoruba’s from the Southwest, desire and demand the post of the national chairman at the next convention of the party.
The followings are the past chairmen:
Chief Solomon Lar, chief Gemade, chief Audu ogbe, prince Ogbolafor, Dr Nwodo, Alhadji Baraje, dr Haliru Bello(AG), Alhadji Bamangar Tukur, Alhadji Adamu Muazu, prince Secondus(Ag),and Sen Sheriff.
From the above within the last 18years there have been 11 chairmen from 5 geopolitical zones. Only the Yoruba Race from the south west have been precluded from this exalted office.
In the interest of fairness, equity and Justice, it is most compelling that the Yorubas of the Southwest zone must be allowed to contest for this post at this coming National convention.
Any attempt to do anything to the contrary, no matter the reason advanced cannot be acceptable.
Failure for a Yoruba man to emerge as the national chairman can only mean two things.
1. That there is a pervasive and concealed hatred for the southwest in the PDP. OR
2. That the PDP has very little or no regard for Yoruba interest as was envinced by the obvious cheating of the Southwest from the position of the Speakerin 2011, which was never rectified nor compensated for the whole of four years.
The sad implication of the above is that, regrettably, many of us from the southwest may have to reconsider our membership of this great party we have helped to nurture and supported through thick and thing, a party we have loved almost more than our very existence, and the party we have served with all our natural endowment, in victory and defeat.
If there exist any conscience, anywhere in this party, let that conscience speak now and stop the new and alien conscienceless power currently holding sway within the party hierarchy.