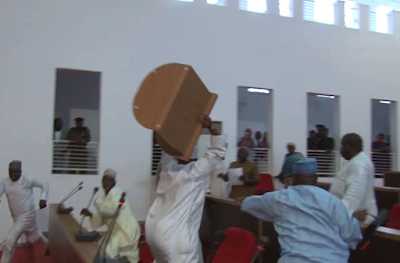 The Nasarawa State House of Assembly yesterday put six of its lawmakers on an inconclusive suspension for their affirmed part in the free for all battle on the floor of the House on Monday.

Recently, the 6 officials for the most part included in the scattering were summoned by DSS to give record of what happened while alternate legislators voted in favor of them to be suspended inconclusively.

The six men were suspended at the session directed by the appointee speaker, Godiya Akwashiki for “offense and for conveying the House to unsavoriness” trailed by a movement moved by the Majority Leader, Tanko Tunga, who blamed them for conveying shame to the House. He was upheld by the Minority Leader, Muhammed Alkali and fourteen others administrators present.
Source: Vanguard