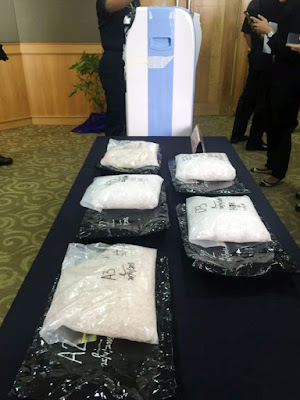 Police arrested a Nigerian private college student on Wednesday, April 27 in connection with the seizure of 20.8kg of syabu (methamphetamine) worth about RM3.2 million, which was smuggled from China via courier service.The drugs, meant for distribution to the local addict population was found hidden in a portable air-conditioning unit at a house in Bukit Mahkota Cheras, to prevent detection by the authorities.Federal Police Narcotics Investigation Department deputy director, Datuk Pahlawan Mohd Dzuraidi Ibrahim said police had launched simultaneous raids in Bandar Mahkota Cheras, Selangor.“We have arrested the 27-year-old man and seized 21 packets of drugs believed to be syabu,” he told reporters at a press conference on Thursday.

“The drugs, weighing about 20.8kg, were stashed in a hidden compartment in the machines. Initial investigations revealed the suspect had brought the drug into the country from China, using a courier service company,” Dzuraidi said police have not ruled out the possibility that the man was connected to a syndicate.“The suspect had just started trafficking in drugs in Malaysia about nine months ago and we are still tracking down the remaining members of the syndicate. The drug can meet the demand of 35,000 addicts for a month,” he said.The Nigerian has been remanded under Section 39B of the Dangerous Drugs Act 1952 which carries the mandatory death sentence upon conviction. Inspector-General of Police Tan Sri Khalid Abu Bakar congratulated the STING team for the success, via his Twitter account. “Congratulations again to STING@PDRM for capturing a Nigerian at Bukit Mahkota Cheras and seizing 20kg of syabu hidden in the air-conditioning unit. #GoPDRMGo,” he said.Source: Malaysia Mail Online, New Strait Times