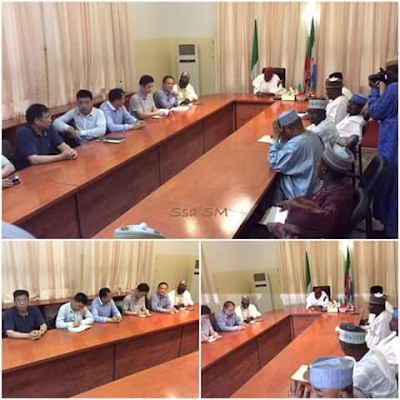 Kano state government wants alternative financiers for the construction of a proposed China town in the state capital, following the failure of some Chinese investors to execute the project, as agreed in a Memorandum of Understanding they signed with the government.
The state governor, Dr. Abdullahi Umar Ganduje, who made this known while exchanging views with Chinese business men from Henan province, China on Tuesday, explained that the initial investors failed to meet up with the terms of the MOU.

It could be recalled that in early 2015, some Chinese financiers signed an MOU with the government, for the acquisition of 250 houses and 41 hectares of land at the Amana city, in Kano metropolis, to construct a China town adjacent to the city,
at the cost of about N5 billion.
The governor, however, pointed out that the investors, who agreed to pay the money for the property acquired within three months reneged and started playing pranks.
“This made us to doubt whether they are really Chinese because we know people from that part of the world normally honour agreements”, the governor stressed.
Governor Ganduje therefore, urged the visitors to looking into the possibility of investing in the projects as well as the abandoned Kanawa market, initiated by the Shekarau administration, in view of their potential for mutual economic benefit.
“Our doors are also open for you to invest in agriculture in Kano in view of our vast water resources and arable land. We shall create the enabling environment for you”, the governor assured, pointing out that his administration and indeed the Federal government under President Buhari are averse to corruption.
The leader of the delegation, Mr.Richard Lu, explained that they were impressed with the land they saw in Kano and would want to invest in agriculture, fertilizer production and irrigation as well as mining of Kaolin, a mineral found richly in Kano.
In another development, the Comptroller General, Federal Fire Service, Engr. Garba Joseph Anebi has visited Governor Ganduje, where he stressed commitment to work with the state government towards curbing fire outbreaks in the state.
He sympathized with the government over the recent fire incidents in the state, urging the government to take more positive states towards fire and disaster monument.
Earlier, the state Governor, Dr. Abdullahi Umar Ganduje who thanked the visitor for his concern over the fire incidents in Kano and expressed readiness to work with the agency towards enhancing the capacity of the state Fire Service.