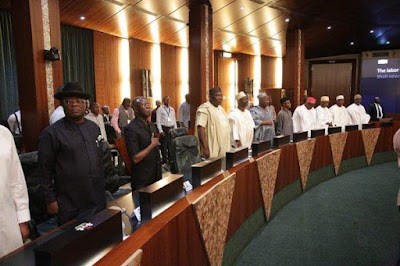 Edo state governor, Adams Oshiomole, has accused former President Goodluck Jonathan of starving APC governors of funds while he was president. Oshiomhole said this while speaking with State House correspondents after the meeting with Buhari and state governors. He said Jonathan prevented APC governors from utilizing the N2 billion ecological fund;

“We are very lucky to have President Buhari at this time. I have been here now for seven and a half years and I have had the opportunity to work with three presidents. Under the last president, it would have been impossible for us to approach Abuja to give us support because we have personal challenges. We were given lectures on fiscal responsibility and all those kind of talks, even though the wastage was more here than any other place at that time.‎ We now have a president who recognises that he is the president of the federation, of which the states are part. And regardless of our political affiliation, this is very important… everybody is able to ask this president to give him support and he is giving. Whereas, in the recent past, some PDP governors got N2 billion from ecology fund, we APC governors were not given. But we promised to be different and I am happy this president is showing that difference.”‎he said