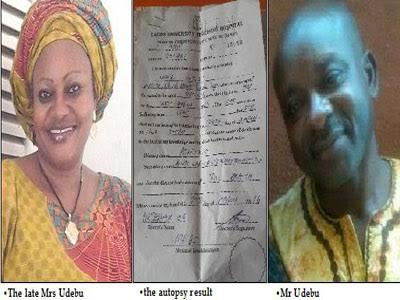 Doctors at the Lagos University Teaching Hospital ( LUTH) Idi-Araba, Lagos have been accused of causing the death of Ngozi Udebu, a 46 years old married woman and teacher at St. Finbarrs college Yaba on March 28th. Speaking to the Nation, husband of the deceased who is an estate developer, Ausbet Udebu, said  professional misconduct by the doctor’s led ‎to the death of his wife on Easter Monday.  According to him, the physician diagnosed and treated his late wife of ulcer but the autopsy showed that she died of Asphyxia which is the loss of consciousness due to the body’s inability to deliver oxygen to its tissues.

Narrating how his wife got to LUTH, 56 years old Ausbet said himself and his family members had gone to  St. Dominic’s Catholic Church in Yaba, Lagos to celebrate Good Friday mass and when they returned, his daughter called him that their mother had severe stomach pain.
“We rushed her to LUTH around 9pm with my wife writhing in pains.  She underwent some tests/scan and the results were ready before 7am the following day.”
He said he took the results to the doctors and was asked to wait until they were ready for ward rounds.
Narrating further, Ausbet said“After about 90 minutes, a doctor finally turned up, checked her and said the scan revealed some trace of ulcer. The doctor prescribed Gascol and an injection which were not available at LUTH. I bought the prescribed drugs. Still, there was no relief. The doctor then prescribed another brand of injection called IV NEXIUM. Again, I bought it.”
He alleged that the emergency unit where his wife and mother of his four children was kept had no light, fan and good ventilation. According to him,  he had to use his phone flashlight to assist the doctor in finding his wife’s vein, adding that he fanned her because she was sweating profusely and had difficulty breathing because of the stuffy room.
“My wife was moved to the female ward later where I was told that no patient relation was allowed to stay. Even her younger sister volunteered to stay and help her out in case of any need but the nurses refused, saying it was against the hospital’s policy. During this time, my wife’s condition deteriorated to the extent of needing oxygen. I bought an oxygen mask to help her breathe. In her weak state, my wife pleaded with the nurses to permit me or her younger sister to be with her through the night, but her plea was equally turned down. ‘Daddy, don’t go’ was the last words I heard her say. I felt dejected as I was forced out of the ward around 11pm.”
Udebu said he got to the hospital the following day around 6am with his eldest daughter, only to be told of his wife’s passing.
“The curtain over her bed was already drawn. Immediately I suspected something eerie. I did not want to believe my wife and mother of my four children was no more. I was told my wife died in the early hours of that morning. Nobody contacted the family when she passed on. Everything about LUTH is wrong. A ward with more than 35 patients with only two nurses available to attend to them. It was later I learnt any patient who registered in any of the doctors’ private clinics will have an army of doctors attending to him/her because he/she has paid in the doctor’s private clinic.”
A relative of the deceased, Quincy Opara, who also spoke on the incident said “The doctor concluded that her death was caused by ulcer even before an autopsy was carried out. The result of the autopsy came out, to the surprise of everybody, it stated that she died of asphyxia. What is the relationship between asphyxia and ulcer which was the doctor’s ‘diagnosis’? This is shameful and above all disgraceful for Nigeria’s prime health institution. The nurse on duty when confronted that they may not have known when she passed on said that she passed on at 3am. She claimed that they battled to save her life.”
‎When contacted, spokesperson of the hospital, Kelechi Otuneme said he was aware of the incident but however cannot speak on it.
“I cannot say anything; management is looking into the matter”, he said.
Meanwhile the corpse of the deceased has been deposited at a morgue in Delta state.
Source: The Nation
<