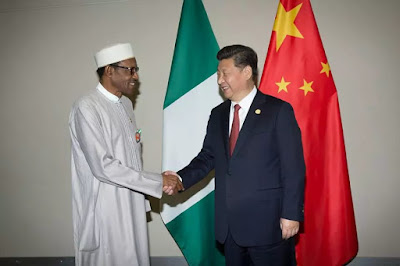 Ekiti State Governor, Mr Ayodele Fayose has written to the Chinese government, seeking the stoppage of the $2 billion loan being sought by the federal government of Nigeria, saying that “the government of China should be mindful of the fact that Nigerians, irrespective of their political and religious affiliations are totally opposed to increment of the country’s debt burden, which is already being serviced with 25 per cent of the Federal Government annual budget.”

In the letter dated April 12, 2016, with reference number EK/GOV/28/10, addressed to President Xi Jinping of China and delivered by Chief of Staff to the governor, Barrister Dipo Anisulowo in Abuja on Thursday, through the Chinese Ambassador to Nigeria, Gu Xiaojie, Governor Fayose said some of the projects for which the loan was being sought were not captured in the controversial 2016 budget, which has been sent to the President by the National Assembly for his assent.Anisulowo, who was accompanied by Deputy Speaker of the State House of Assembly, Hon Segun Adewumi, Chairman House Committee on Information, Gboyega Aribisogan, Chairman House Committee on Health, Dr Samuel Omotosho and Special Assistant to the Governor on Public Communications and New Media, Lere Olayinka, said Governor Fayose, who is in China will also deliver a copy of the letter directly to the Chinese President.The letter read; “I write as one of the major stakeholders in the project Nigeria, and a governor of one of the federating units making up Nigeria, to draw your attention to report that the Federal Government of Nigeria is on the verge of obtaining a $2 billion loan from the Export-Import Bank of China. “This $2 billion loan is part of the N1.84 trillion the Federal Government of Nigeria has proposed to borrow to finance the 2016 budget, which is yet to be signed by the President, Mohammadu Buhari owing to unending controversies between the Executive and Legislative arms of government.“According to reports, Nigeria desires to raise about $5 billion abroad to cover part of its 2016 budget deficit. This is projected to hit N3 trillion ($15 billion) due to heavy infrastructure spending at a time when the slump in global oil prices has slashed the country’s export revenues.“While conceding that all nations, especially developing ones need support to be able to grow because no nation is an island, I am constrained to inform you that if the future of Nigeria must be protected, the country does not need any loan at this time. “The government of China should be mindful of the fact that Nigerians, irrespective of their political and religious affiliations are totally opposed to increment of the country’s debt burden, which is already being serviced with 25 per cent of the Federal Government annual budget.“It will interest the government of China to know that some of the projects for which the loan is being sought are not captured in the controversial 2016 budget, which has been sent to the President by the National Assembly for his assent. For instance, the Lagos – Calabar Rail project was not included in the budget proposal the President presented to the National Assembly and it was not included in the Appropriation Bill passed by the National Assembly.“Most importantly, Nigeria is presently servicing debt with about 25 per cent of its annual budget and what will happen to the economy in 2017, when the country will begin to service the additional debt to be incurred this year is better imagined than experienced.“The Chinese government must also be aware that some western nations approached by the Federal Government for loan diplomatically and cleverly declined.“This must have been informed by the suspicion in the present government’s capacity to salvage the nation’s economy as well as the sincerity in the fight against corruption. More so that Nigeria’s Foreign Reserve, which is the only guarantee for foreign loan has declined to a very uncomfortable level.“For instance, the UK Telegraph Newspaper reported today that hundreds of millions of pounds of British foreign aid given to Nigeria to help combat Boko Haram terrorists is instead being used to fund a witch-hunt against opposition politicians.“Therefore, like the foreign aid that is reportedly being mismanaged, whatever loan that is granted to the Federal Government of Nigeria by the Chinese Government may be mismanaged too. “In my opinion, Nigeria needs the collaboration of the Government of China in the area of technology transfer, rather than granting loan that will be mismanaged under the guise of building infrastructure.“It is also important for the Government of China to note that the Federal Government of Nigeria claimed to have recovered and still recovering trillions of Naira allegedly looted from the treasury. For instance, over $200 billion is expected to be recovered from Dubai, the United Arab Emirate while N3 trillion was said to have been saved from the Treasury Single Account (TSA).“The Federal Inland Revenue Service (FIRS) has also said that it will generate not less than N4.5 trillion this year. What then is the rationale behind the $2 billion loan from China?“As a result of the government’s bad economic policies, the middle class has been eliminated, power supply is at its lowest ebb, petrol is not available and by the time fresh loans begin to pile up, 95 per cent of Nigerians will definitely be pauperised.“Particularly, by the autocratic nature of our president, the Federal Government is not prepared to listen to wise counsel, hence the desperation to take unwarranted loans even if the future of Nigeria and its people will be mortgaged.“It will also interest Your Excellency that our presidents visit to china will be his 28th trip outside Nigeria since he assumed office 10 months ago and this unnecessary foreign trip is estimated to have cause the country $50 million.“I therefore appeal to Your Excellency to assist Nigeria and its people in the area of technology transfer so as to limit importation of goods and services, rather than granting the country unnecessary loan.“In conclusion, I wish to state that this letter and information became necessary for posterity sake and to put it on record that when the future of Nigeria and its people was going to be mortgaged through loan from the People’s Republic of China, I stood up to be counted in defence of our country.”