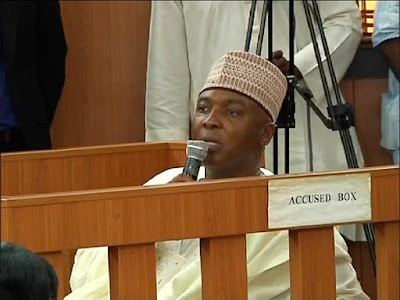 Senate president, Bukola Saraki, has decided to explain to Nigerians why he has been “jumping” from one courtroom to another since his 13-count charge on false asset declaration began.
Saraki who wrote an open letter to Dele Momodu cited strange things that have happened and are still happening as his reason for seeking justice.Saraki said he thought his trial at the CCT will be dismissed like that of Asiwaju Bola Tinubu.

“Some people have wondered, why has Saraki been “jumping” from one court to another instead of facing his trial? To those people, I would say that I have only gone to those courts in search of justice. Strange things have happened, and they are still happening,” he said.

“For example, Section 3(d) of the Code of Conduct Bureau and Tribunal Act states that the Bureau shall refer any breach or non-compliance to the Tribunal. However, where the person concerned makes a written admission of the breach, no reference to the Tribunal shall be necessary.

“It was on this basis that the case against Asiwaju Bola Tinubu was dismissed in 2011, by this same judge in this same Tribunal on the grounds that he was not given an opportunity to deny or admit to any breach before he was brought before the tribunal.”

“This was the ruling that I relied on in making my case. But what did the judge say? That he had judged in error in 2011 and he had since realized his error and departed from it. My question is whether a Tribunal of first instance has the power to reverse itself.

“I should expect that everyone would be worried if justice is applied differently to different people. However, in spite of my fears, I remain hopeful. Why? Because the judiciary does not end with this Tribunal,” he said.