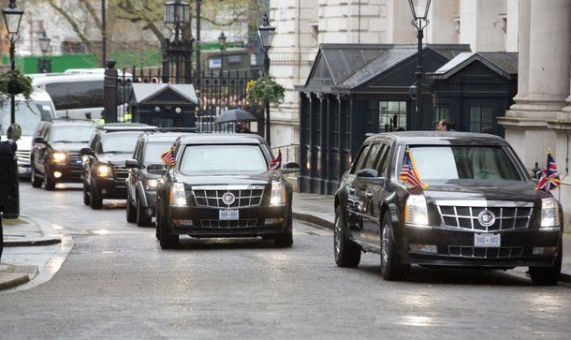 According to a report by the Daily Mirror, U.S President Barack Obama will use 3 helicopters, a vast motorcade and a modified jumbo jet if he is to come to a city near you. The U.S President and his wife Michelle Obama are on a 3 day visit to the UK and the newspaper/website say that Obama ‘has an entourage worthy of a pop diva with an inferiority complex.’ Read Full Article after the cut.. 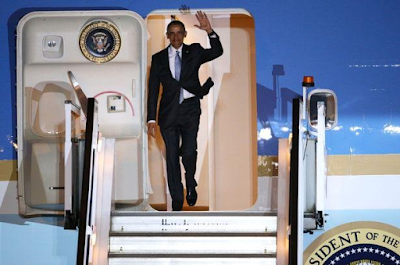 ‘When the President’s convoy arrives it’s, well, an event. When he came through Parliament Square today, solice bikers with flashing blue lights started dripping through and blocking roads ahead of the President’s car.’

Then the trickle gave way to a flood – about a dozen black cars with blacked-out windows and blue flashing lights raced past. They were joined by five minibuses carrying members of White House staff and the US press.

‘The biggest baddest limo is saved for the President – so naturally it’s called The Beast. It’s the right name for a ‘tank with windows’ that has doors eight inches thick and can withstand a chemical attack.’

‘There are actually said to be a dozen of the custom-built moving fortresses in service, and two were spotted this time in the Presidential motorcade. It has seven seats, Kevlar-reinforced run-flat tyres, a driver with top secret service training, a foam-coated explosion-proof engine and blood of the President’s type on board.’

Needless to say it’s not very eco-friendly. Experts at AutoWeek claimed it does just 3.7 miles to the gallon. There was no taking the train through Essex when Mr Obama touched down at Stansted Airport.

Waiting for him was his Presidential helicopter Marine One, which he uses regularly to take trips within the US. When he visited Windsor Castle today the aerial entourage was even bigger .

A second helicopter carried the President’s aides – while a third ferried around members of the US press corps. Those happy moments on the doorstep with David Cameron don’t just happen by magic.’

They take the preparation of a huge network of staff, and reports for the number travelling with the President usually run into the hundreds. We have asked the White House exactly how many people are travelling with Mr Obama this time.

How could we forget Air Force One?

No trip would be complete without the President descending the steps of his modified version of a Boeing 747. Its beige interiors include a lounge with two sofas, a workout room, toilet, shower, vanity unit and double sink. It even has a TV studio so he can address the nation from the skies.

That’s not to mention at least one separate Air Force transport plane which takes that motorcade  around the world. It’s certainly impressed our Prime Minister, who’s getting his own £10m Con Air jet n future.

With all those planes and helicopters, the Transport Secretary has had to enact flying restrictions as part of Presidential security.Drones have been banned completely from most of London and the surrounding area between 9pm on Thursday and 11am on Sunday.’

Restrictions were also in place for the skies between Windsor and London while the Obamas went for lunch at Windsor Castle. And they applied on the route to and from Stansted Airport, where Air Force One is parked.

Those outriders, PCs and armed officers, whose duties include security sweeps at Windsor Castle and Downing Street, don’t come for free. Scotland Yard wouldn’t tell us today how much it is due to spend on President Obama’s current visit. But a previous visit by President Bush in 2003 cost £4.1million because it attracted a big protest against the Iraq War. 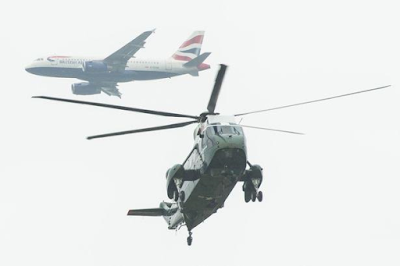 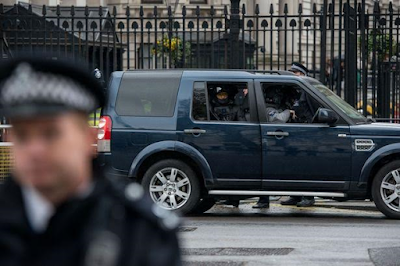