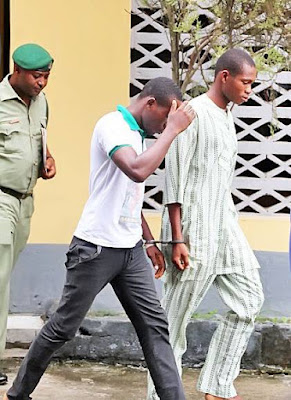 Yunusa Dahiru(pictured right) who abducted Ese Oruru from Bayelsa to Kano state last year, was arraigned before the Federal High Court in Yenagoa, Bayelsa State today March 14th.  According to Sahara reporters, Dahiru was charged with abduction, kidnapping, unlawful carnal knowledge and sexual exploitation on March 8, 2016.
During his arraignment today, the prosecuting counsel, Kenneth Dika, asked the presiding judge, Justice H. A. Nganjiwa, to approve a secret trial as the victim, Ese Oruru, was a minor and deserved the protection of the courts.The defence counsel, Kayode Olaoshebikan, opposed the application, arguing that Ese’s lawyers had already exposed her to the public and there was no need for a secret trial.

“Ordinarily the law allows for a secret trial, but you must give the court reasons. Our own contention is that the matter is already in the public domain. The prosecution created a media nightmare for the girl on their own. They dug the pit, they should wallow in it. Even if the court allows it, the media cannot be excluded from the trial, but our own contention is that what they are seeking to prevent has already been created by them from the onset before the trial.”he said.

The judge after hearing both arguments, adjourned the case to March 21st and ruled that Yunusa be remanded in prison custody until when judgement on his bail application will be given.