Senate President, Dr. Bukola Saraki, succeeded in halting his trial on charges of false assets declaration before the Code of Conduct Tribunal from taking off on Friday. 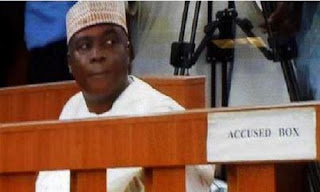 The trial was planned to initiate on Friday, yet Saraki’s new lead counsel, Chief Kanu Agabi (SAN)‎, educated the Danladi Umar-drove tribunal that he had documented a movement which he said must be heard before trial could begin.

In any case, the lead arraigning counsel, Mr. Rotimi Jacobs (SAN), portrayed the movement as “an intentional endeavor to prevent the trial from going on”.

“The litigant continues saying that there is no argument against him and that he is being oppressed. Why doesn’t he give the trial a chance to start so that the entire world can see the mistreatment?” Jacobs inquired.

The prosecutor, who said he had not been presented with the movement, demanded that by temperance of the judgment of the Supreme Court conveyed on February 5 which approved the trial, the day’s business was for the indictment to open its case.
He added that by virtue of section 396 of the Administration of Criminal Justice Act, 2015, even if the motion was heard, ruling on it could only be delivered along with the judgment in the case.

‎But Agabi, who apologized for the mistaken administration of his movement on the Federal Ministry of Justice rather than the arraignment, said since his movement was testing the purview of the tribunal, it must be heard before going into the substantive case.

Jacobs later acknowledged service of the movement in open court and the tribunal director determined that the two gatherings ought to trade different procedures in connection to the movement before March 18‎.

The tribunal altered March 18 for the becoming aware of the movement, including that administering it would be conceded and trial would initiate around the same time.

‎Saraki, was went with to the Friday’s procedures by around 40 representatives.