Read below, the reactions of Dr Mrs Lami Amodu,the Principal of Queens College, as well as other stakeholders, to the allegations of sexual molestation of an unnamed junior student. 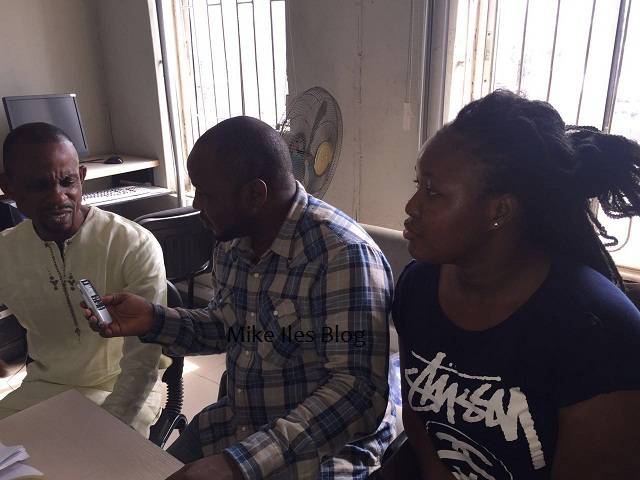 When I resumed work as principal here, I was told of a certain matron who housed a person that had attempted to have an affair with a student. I was not here when it
happened but as soon as I was told, I made sure that the matron was moved out of the school premises. I have zero tolerance for such behaviour. I have a daughter who schools here, even before I began work here. I will not take chances.

As I talk to you, no single parent has come to me or any of my Vice-Principals to report Olaseni as a molester. I assure you that if the allegation was true, other parents would have been buzzing our lines non-stop. Children spread gossip fast. They would tell their parents or relations, if anyone was molesting them here. No parent would take such news lightly.

When this news reached me, I summoned an emergency meeting of all the critical stakeholders. We all discussed before inviting Mr Osifala. Every one of my staff says positive things about the man. Of course they were all here (Queens College) before me, so they are qualified to assess members of staff properly.

Personally, even before I resumed, a former principal of Kings College had recommended Olaseni as a credible person to work with. His name is Otunba Dele Olapeju. He is a highly respectable man. Let us not forget that Olaseni worked with five different principals, all of who also told me good words about him, despite the various allegations against him.

I have investigated and we are not relenting in our determination to get to the bottom of this case. The man in question has been of impeccable character and committed service since I resumed work here. I can vouch for him.

When I resumed work here, I was told a few unsavoury things about him. But investigations showed that each time a new principal resumed at Queens College, these allegations popped up. They would tell every new principal that Mr Olaseni is a molester. But after investigations, nothing concrete came up. My predecessor, whom we just sent forth today, told me the same thing. So it has been a recurring decimal, these allegations.

We have come to understand that some persons are on a campaign of calumny against this teacher. Yet, he is the best teacher in our school. During World Teachers’ Day, he bagged five awards. The students all have good things to say about him. Somebody somewhere is up to some mischief and we will uncover this unfortunate drama.

We place a premium on the security and welfare of our girls. We are all mothers. We will not allow any staff to endanger girls in this school.

I urge the general public to always endeavour to confirm the stories they read on social media. Not everything they read there is true.

I have quietly observed Olaseni over time. I have X-rayed his relationship with students and I have not found him wanting. The same students he has been accused of molesting, are the ones who voted him their best teacher.

The PTA Chairman is an external person, and she attests to the character of the accused teacher. It did not take long for me to see why the past principals recommended him. He is extremely committed to his job and some people are ready to bring him down.

I read the story on social media. I trust the public to read between the lines. There are too many inconsistencies with the story. Nothing is hidden in this school. If, like the story said, students came out at night to boo the molester, do you think that before dawn, the story would not have spread like wild fire? And for a whole month, nobody reported to me? It is not possible.

There are approved channels of communication here. If the parent actually went to the Vice-Principal and was turned down, did the person ever come to me? No parent here can ever say that they are afraid of coming to me. Yet I never heard of this story until today. That is not possible.

Again, a part of the story alleged that one of my Vice-Principals threatened the parent to go to Abuja, and that nothing will come out of it. I smiled when I read that part. No right thinking person would have made such a comment. I have been here long enough to know what each one of my staff are capable of saying. There is no way an administrator of her calibre would say that.

This seems like an attempt to ridicule, not just Mr Olaseni, but the hard-earned reputation of Queens College. We are consulting with relevant stakeholders and we will get to the bottom of this.

I am the Chairperson of the Parents-Teachers Association (PTA). I represent the best interests of parents of the children in this school. I have two daughters schooling here. After six years in the school, I should be able to trust them to intimate me about things that happen in the school, especially when I ask. They have made it clear to me, no such thing occurred.

Meanwhile, no parent has called me to make any such allegation against the teacher in question and I find it very strange.

I know Olaseni as a teacher who has respect for constituted authority. Knowing how the school community works, I assure you that if such a thing has happened, the students themselves would have given the matter leverage. It would not have needed a blogger to break the story. There is a policy against use of phones in the college but we hear rumours that some students smuggle in phones. Do you imagine that such students would not have called their parents with the gist? And for all this time that the event allegedly occurred (one month now) do you think that no parent would have raised eyebrows?

When I asked my daughter about this story, she said she only started hearing about it today. I am an Edo woman, I speak from my heart because I fear only God. Even if I face anybody now, I can defend him (Olaseni) authoritatively. I have always recommended him to every principal that was posted here. Even the current principal will confirm that I spoke positively about this teacher to her. He always seeks to correct everything going wrong within the school. He is fearless. He never abdicates his duties and I say this with a sense of pride.

I wonder who would want to pull him down. We are looking into this matter and we will involve the Police.

These are all false allegations. Even with some past principals, similar allegations were made against the young man. Yet they all worked happily and successfully with him, enough to make them recommend him to their successors. Even the principal we are sending forth today, Mrs Osime, can clarify this. It is all crooked lies.

How can you make such a weighty allegation and not be able to tell us who the child is? And if you see what is written in the allegation, you will know that they are all lies. For starters, Mr Olaseni does not live on the school premises. So how can he be responsible for molesting a child by 2am?

Again, he teaches Biology. The story says he teaches Integrated Science. That is a lie. He also does not teach junior school as alleged in the story. Biology is offered in the senior school. To the best of our knowledge, Olaseni does not drink alcohol. So there are some fundamental lies that already give away the fact that someone is being funny somewhere.

We have investigated. We tried to find out from our boarding house mistresses about the said event, one month ago. You can ask around at your own convenience, there is no record of such a thing.

About the allegation that I told the parent to go to Abuja, how is that possible? How can I tell a parent that, when no parent has even come to me with such a report? Did I threaten a ghost?

The story also said that the alleged ‘victim’ tried to call her mother that night. Since phones are not even allowed in the school, how is that possible? We do not know yet, the alleged parent nor the student.

I am Mrs D. A Oludinmu. I am the senior boarding house mistress of Queens College, Yaba. Yes, I admit that Mr Olaseni comes around the hostel because he is the Hostel Maintenance Officer. But there is a procedure for that. He never comes without the permission of the principal and even during emergencies, he does not come alone. The principal still has to permit him, and he always comes with the maintenance boys.

Mr Olaseni does not come to the hostel outside working hours. I can vouch for him.

The story has it that Mr Osifala lives in the school compound. No male staff lives within. They also said they saw our teacher with alcohol after lights out. This cannot be true because he speaks against alcohol in class. He is our Biology teacher, not Integrated Science.

Knowing him from J.S.S 1 to S.S. 3 now, I can say that the allegations are wrong. No, I just heard the story this morning. My statement cannot be doctored.
Yes, we complain to him when we have problems in the hostel. These problems include bad electric bulbs, water problems, etc.

I am worried about this matter because there is no truth in it. It is not the first time I have been accused falsely. Students have openly confessed to being recruited to frame me up in the past. The teachers were there. They can tell you the truth. All I want is to be the best teacher I possibly can. The reason I always win the awards is a function of my drive for excellence.

It ensures that I am always busy. My work is not secret. I am an open book. I know that whatever I say now will not matter to those who have made up their minds to judge me. Let God take control.