The Murtala Muhammed Foundation charged with the responsibility of identifying the female suicide bomber arrested in Cameroon who claimed she was one of the missing Chibok girls, has released a statement stating that leaders of the Chibok Parents association have refuted the claims.Some of the authorised representatives of the community who were allowed to see photos of the girl, confirmed she is not among the girls kidnapped by Boko Haram from the Government Girls Secondary school on April 14th 2014. The statement reads; 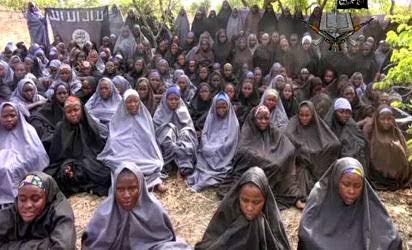 “On Wednesday, March 30, three authorised representatives of the parents of the 219 missing Chibok girls arrived the Murtala Muhammed Foundation (MMF) offices from Chibok Local Government Area of Borno State to view photos of the girl claiming to be one of the 219 missing students kidnapped by Boko Haram.

Mr. Yakubu Nkeki, chairman, Lawan Zana secretary, Mrs. Yana Galang women leader of the Chibok Girls Movement, all of whose children are amongst the kidnapped 219 Chibok girls were upon their arrival shown photos of the girl who was arrested along with another woman on Friday March 25th carrying explosives in Limani, Cameroon. A set of photographs had been sent to the MMF on the evening of Monday 28th of March by Garba Shehu, Special Assistant to the President on Media and Publicity. A more recent batch of photos, taken at 2pm on Tuesday 29th of March was sent to the MMF by Ambassador Hadiza Mustafa, Nigeria’s High Commissioner to Cameroon. ‎The earlier set of photos showed the girl partially clothed and squatting on the sandy floor within a low cement wall enclosure, which was surrounded by soldiers and some civilians. In that same batch, the woman was being carried in the arms of a soldier, with her face swollen and plaster covering different parts of her body. She was also partially clothed. In the more recent photos, however, the girl was fully clothed, standing against a wall and looking into the camera. The woman was also standing straight beside what appeared to be a hospital bed, she was fully-clothed. Her face still appeared slightly swollen with dressing on her forehead. The Nigerian government by Tuesday afternoon had already informed the MMF that the girl has clearly identified herself as Maryam Alhaji Wakeel, 12 years old, originally from Maiduguri but abducted from Bama when the town was overrun by Boko Haram a year ago. The woman has identified herself as Aishatu Usman, a 35-year-old mother of two children. However the identification process was still carried out to lay to rest any claims that the girl is one of the 219 girls kidnapped from their school in Chibok on April 14th 2014. Mr. Nkeki, Mallam Zana and Mrs. Galang have confirmed that the girl and the woman do not fit the description of any of the missing daughters from Chibok. We have also made arrangements for other stakeholders to view the photos at the MMF office in Abuja as we are yet to ascertain how the girl came to describe herself as one of the missing Chibok girls. The identity of the girl notwithstanding, the MMF has informed the Nigerian government of its willingness to continue to pursue the matter, and is willing to provide the captured girl and woman any support they may require. These girls and women are merely victims, and must be treated as such by the society. They have already undergone grave violence at the hands of their Boko Haram captors. We must ensure that they are not made to undergo additional violence at the hands of their compatriots. Nigerian government officials have informed the MMF that both Maryam Alhaji Wakeel and Aishatu Usman have been handed over to the Nigerian military this evening and are currently on their way back to Nigeria.