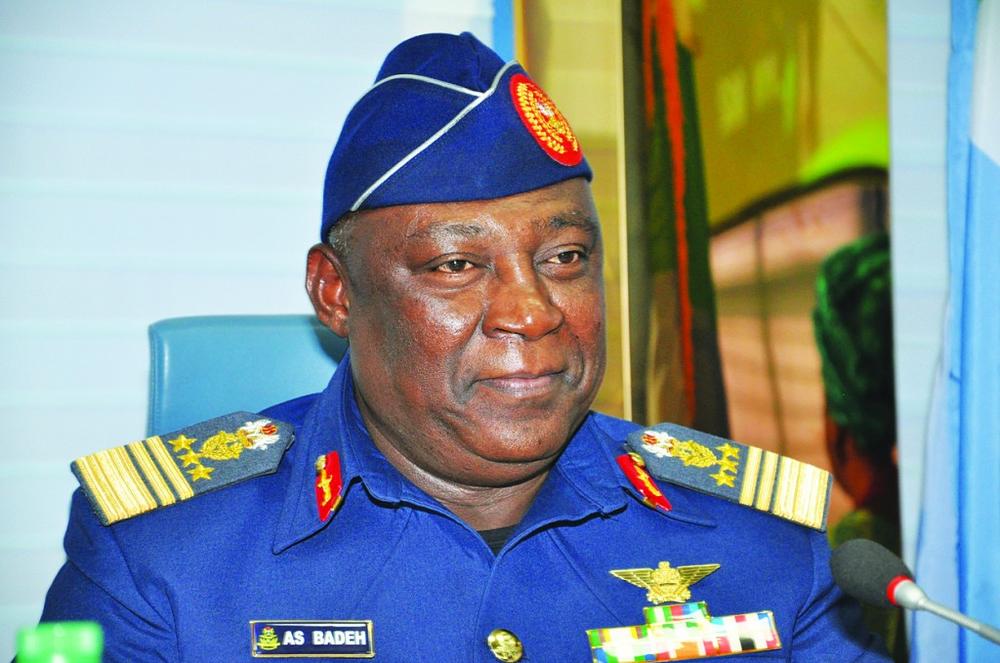 The Director of Finance of the Nigerian Air Force (NAF), Salisu Abdullahi, on Wednesday, told the Federal High Court, Abuja, that Alex Badeh diverted N1.7 billion overhead between 2010 and 2013.
The News Agency of Nigeria (NAN), reports that the ex-Chief of Defence Staff, was accused of diverting N3.9 billion while serving as Chief of Air Staff within the period.
Abdullahi, a prosecution witness, said the Nigerian Air Force under Badeh, received monthly overhead of N4 billion for the payment of salaries.
He, however, said that the actual overheads meant for payment of salaries and allowances were a little over N2 billion.
“Out of the balance of about N1.7 billion needed by the Force for overhead monthly, the sum of N558 million was taken to Badeh’s personal residence at Niger Barracks.
“My Lord, the defendant was strictly responsible for the management of administrative expenditure.
“The expenditures made from the remaining balance were usually approved by the Chief of Air Staff through the Procurement and Planning Committee.”
Abdullahi also said the defendant had always refused to confirm receipt of the balance in writing.
“The only instruction he gives in writing are those requests forwarded in writing from branches and units for approval.
“Where such approvals are given, they are forwarded to my office for necessary payments,” Abdullahi said.
Abdullahi said: “The sum of N120 million was at one time allotted to my office on a monthly basis, but I rejected the offer, since I did not see any need for its use.
“My principal (Badeh) purchased several houses; including a shopping complex at the cost of N1.1 billion, named under the title of the second defendant, a company named `Iyalikam.’
“The shopping complex was purchased following Badeh’s directive. That property is located at 600, Ogun Rivers St., Maitama, Abuja,” he said.
He also added that he later discovered that Badeh’s son, Alex Junior, was to use the upper part of the complex’s building as a restaurant.
According to Abdullahi, another building which Badeh used as his private office was purchased at the cost of N650 million, and under the name of a certain Mustafa Yarima.
“Another building was purchased for his son Alex Junior at the cost of N260 million and renovated at the cost of N60 million, while the sum of N90 million was used for the purchase of furniture.
“The fourth building was purchased at the cost of N330 million for Badeh’s second son, identified merely as ‘Kam.’
“Two other houses were also purchased in Kaduna, both of which were uncompleted,” he said.
Abdullahi said all the houses were bought under the name of a third party, adding that Badeh used the N558 million received by him monthly to buy the property.
Abdullahi also revealed that Badeh’s official salary was about N2 million only.“My Lord, I would like to state that I did not receive any financial reward from him for taking the N558 million to his residence every month.“It was built into my official duty as the Director of the Force by the defendant,” he said.
Samuel Zibiri (SAN), counsel to Badeh, had objected to the testimonies of the witness on the grounds that most of the narratives were not captured in proof-of-evidence.
Zibiri asked the court to give him time to prepare the necessary questions for the witness’ cross examination in the interest of fair hearing.“My Lord, we have seen new issues emerging, and we required time to properly prepare the cross examination for this witness who has simply come to lie,” Zibiri said.
The application for adjournment was supported by Simon Olugunorsiha, counsel to the second defendant, stating however that his request stemmed from his poor health.The Judge, Justice Okon Abang, held that the court would grant the application in the interest of justice.
The matter was adjourned till March 23, for the resumption of cross examination of the first prosecution witness. (NAN)
Advertisements