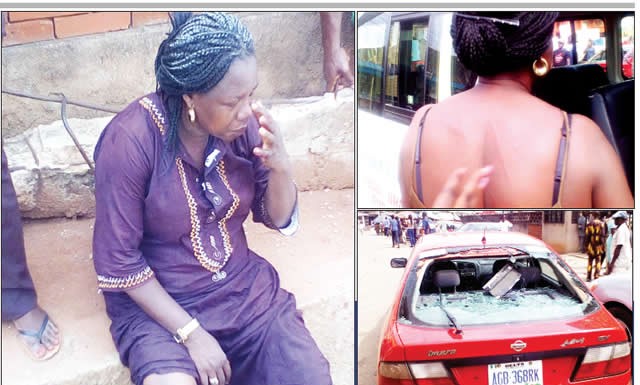 An Air Force official had a physical alteration with a woman identified as Mrs Joy Agboghinde 51, in front of Benin City Electricity headquarters for allegedly obstructing traffic.According to eyewitness who spoke with Tribune said  the fight between the army officer, a major, and Mrs Agboghide, was caused by traffic situation in front of the BEDC office due to traffic congestion and indiscriminate parking of vehicles in the area.

It was learnt that the woman, who was driving from the Forestry Road axis, was asked to allow vehicles coming from the off Akpakpava axis pass and after allowing about five vehicles pass she insisted on passing thereby obstructing traffic.
Eyewitnesses also said that trouble started when the major, who had just left the BEDC office, accosted Mrs Agboghide and asked her to reverse her vehicle so as to allow vehicles coming in the opposite direction pass.
It was learnt that the woman declined, leading into fight between the trio of the woman, the major and his wife.
In the melee that followed, it was learnt that teargas cannister was used on the woman, while she retaliated by damaging the army officer’s car.
The army officer was said to have retaliated by inviting two army officers within the vicinity, who joined him to beat up Mrs Agboghide to a pulp and damaged her car including the wind screen and the rear screen that were shattered.
Security was beefed up in the area as members of the civil society group and family members besieged the BEDC office, alleging complicity of BEDC in the beating up of the woman.
It was learnt that Mrs Agboghide was later taken to hospital after she first reported at a police station.
However according to the woman who recounted the story to Punch she said,

“I went to Lagos Street to get some food items. So, I passed through Forestry (Lane) to the  road beside former NEPA. As I was going,  the driver of  the  vehicle  in front of me and some traders around told me to stop. I stopped and about four vehicles passed. Later, the traders told me to go. As I moved on, a soldier told me to reverse and I explained that I had waited for some vehicles to pass. But he said, ‘Do you know who you are talking to? Reverse!’ Before I knew it, he used his gun to hit my windscreen. I came out and asked him what I had done and he said I should wait. He went into the BEDC premises and came out with some soldiers who descended on me.”