The chairman of the representing All Progressives Congress, APC, in Kano State, Umar Doguwa, has made a u-turn by abandoning the announcements he made on Thursday undermining former Governor Rabiu Kwankwaso with suspension for sorting out a “fierce rally”. 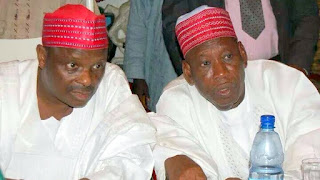 Mr. Doguwa had while tending to columnists on Thursday in Kano said Mr. Kwankwaso confronts suspension from the party for supporting a fierce rally while paying a sympathy visit to the senator, Abdullahi Ganduje, over the demise of his mom.

He said Mr. Kwankwaso had shown “demonstrations of indiscipline which ought not be permitted to go unpunished”.

He likewise said the party’s chairman and seniors had affirmed the constitution of a disciplinary council to punish Mr. Kwankwaso.

As per him, the sympathy visit was purposely swung to a fierce rally to bring about pandemonium in the state, mishandle the senator and President Muhammadu Buhari.

Be that as it may, while tending to columnists on Saturday, the party chairman said he was constrained by Mr. Ganduje to put forth the expressions he made against Mr. Kwankwaso.

He told correspondents at the Press Center in Kano that the Executive Arm of Government under Mr. Ganduje “absolutely befuddled a get-together with Politics on the grounds that the visit of Kwankwaso was politicized out extent”.

He said he was pulling back his Thursday articulation undermining to suspend of kwankwaso.

” I thus pull back the announcement and disassociate myself from it,” he said, including that the remarks were ” a result of twisted and evil components in the legislature whose position and tricks are to bring about perplexity and disunity among the general population of our party.”