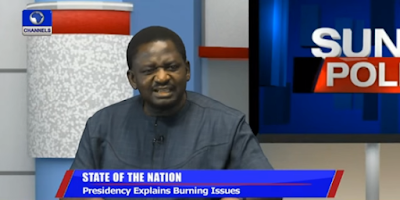 Special Adviser to President Buhari on Media and Publicity, Femi Adesina, was a guest on Channels TV yesterday evening where he said Nigerians who are complaining of poor power supply should go and hold pipeline vandals responsible. According to Adesina, Nigeria had 5,070 MW of electricity recently but the activities of pipeline vandals have adversely affected the electricity supply

“After having 5,000 MW, there was a vandalism of gas pipeline, first in Bayelsa where we lost about 1,600 MW in one day and then there was another one in Delta state where we lost another 1000 MW. So if some people are crying they are in darkness, they should go and hold those who vandalize the installations” he said

On the comments made by the Minister of State for Petroleum Resources, Ibe Kachikwu on the lingering fuel scarcity, Adesina said he should not be crucified. Kachikwu had said last week that the fuel scarcity will persist for the next two months. This statement has drawn widespread criticism from many Nigerians including the National leader of APC, Bola Tinubu.
Adesina says although Kachikwu might not have chosen his words right, he was only saying the truth
“The Minister said the crisis will end in weeks and that weeks amounted to May which drew a lot of flags. I think the Minister spoke with candor and maybe he didn’t weigh the words but he said the truth. Will people rather have him say in two weeks and then it doesn’t happen? He said May which is about 4-5 weeks away. So I think the Minister need not to be crucified for what he said”.

He added that fuel scarcity is not only peculiar to the Buhari led government as it has always been part of previous governments.