some military men fail to recall that we are civilian rule not military dictatorship, Two military officers in Lagos professedly plummeted on a lawyer, Gabriel Akintoye, who was way home from work, constrained him to his knees and bloodied his face with armed force boots, as indicated by a request to the Chief of Army Staff by Festus Keyamo, a human rights lawyer. 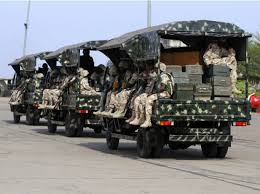 The episode, which happened at around 5:15 p.m. on February 11, began when the two officers, who were strolling behind Mr. Akintoye as he drew nearer the Yaba market, requested he walk quicker or move far from the street for them.

“Our customer basically ceased and with the influx of his hand flagged the open route for them to cross,” Mr. Keyamo expressed in the petition dated February 23.

“The activity incited the lesser positioning officer among the two who termed the activity to be annoying and requested our client to go on his knees.

“Our client declined to go on his knees and requested to know the reasons behind such embarrassing request and told the armed force officers that he is an attorney and that he knows his rights.

“The officers kicked more incited and off to beat and strike our client. They constrained our customer to go on his knees and utilized their armed force boots on him till he began to seep from his mouth and his nose.”

Mr. Keyamo said his client supported wounds from the attack, lost two cell telephones, a wallet, and a white envelope that contained N300,000.

After the charged attack, Mr. Akintoye and a few sympathizers took after the armed force officers to their Barracks where they met one D.N Onuchukwu, a two star General officer who assumed control over the matter and “professed to settle the issue,” the request expressed.

“From that point, one of the warriors that ambushed our customer educated Mr. D.N Onuchukwu that one of our client’s sympathizers who happens to be a legal advisor had video record of the ambush occurrence. This information incited Mr. Onuchukwu to mightily collect the said lawyer’s telephone, devastated it and requested the lawyer to flee.”

Mr. Keyamo requested the military chain of command deliver the officers and for disciplinary activities to be allotted to them.

He likewise requested a N50,000 pay for the attack, open mortification, and dehumanizing treatment of Mr. Akintoye.

“It is correlated to note this demonstration by the men and officers of the Nigerian Army delineates an obtrusive dismissal for the protected privileges of our client and the principles of any enlightened society and obviously demonstrates a terrible attack against the fuss for the enthronement of the standard of law championed by this just agreement,” said Mr. Keyamo.

“Pay heed that in the impossible occasion that the Nigerian Army powers disregards, rejects and/or fails to notice to our requests inside of 30 working days of administration of our letter to you, we should be left with no choice than to implement our customer’s correct which won’t be restricted to an activity against the Nigerian Army in court.”